But feeling called to the ministry he took a three years’ course in the Theological Seminary of Yale College and was licensed to preach by the Presbytery of Philadelphia September 23, 1846. For some months he labored as a missionary at Winchester, Va., and then removed to St. Louis, Mo., where he was pastor of a church and principal of the preparatory department of Webster college for nine years and then was called to the pastorate of a church at West Ely, Mo. He died at Zanesville. Ohio, Feb. 24, 1882. 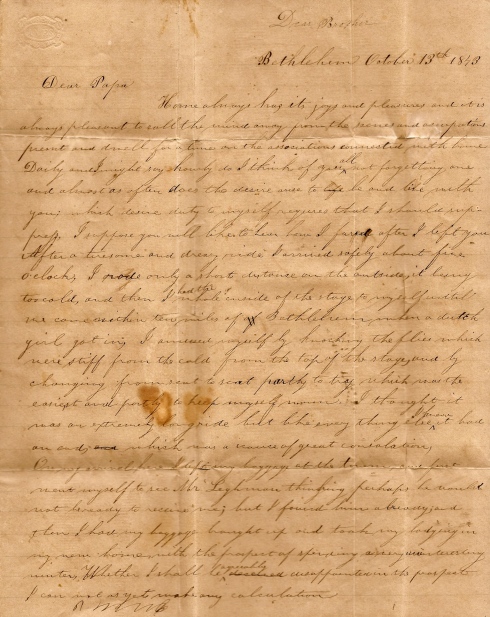 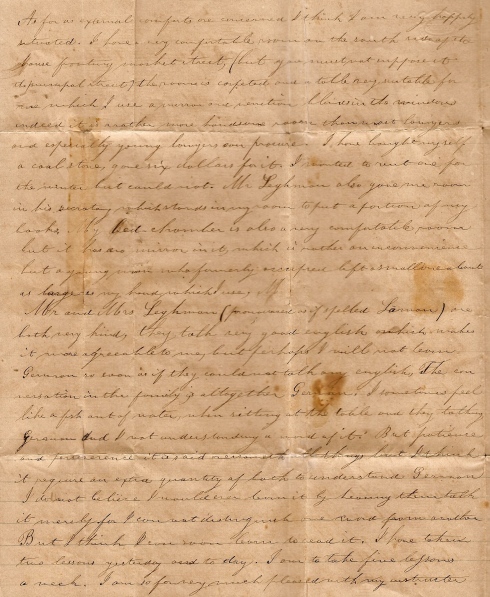 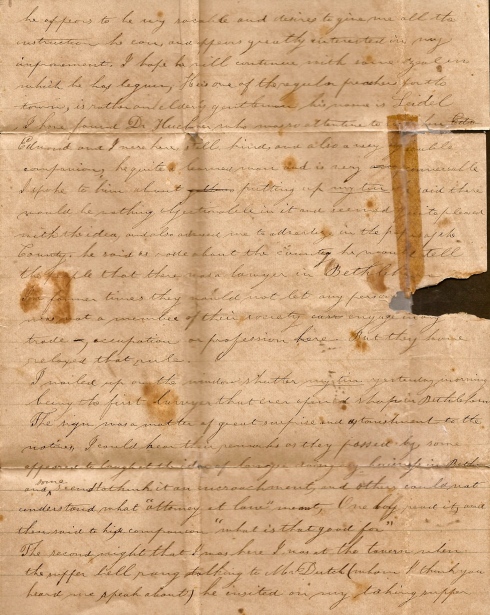 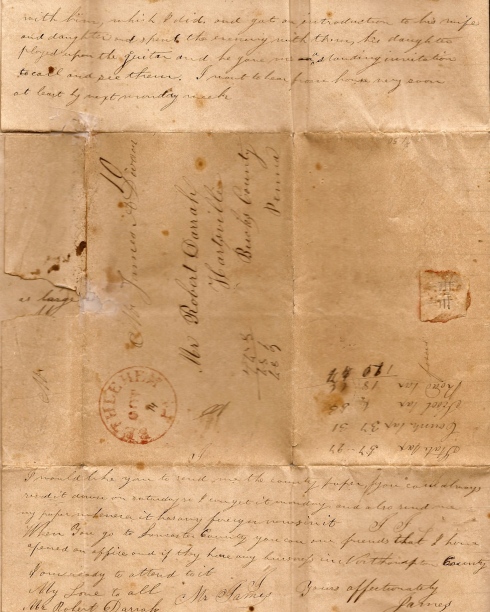 Home always has its joys and pleasures and it is always pleasant to call the mind away from the scenes and occupations present and dwell for a time on the associations connected with home. Daily and I might say hourly do I think of you all not forgetting one and almost as often does the desire arise to be and live with you; which desire duty to myself requires that I should suppress. I suppose you will like to hear how I fared after I left you, After a tiresome and dreary ride, I arrived safely about five o’clock. I rode only a short distance on the outside, it being too cold, and then I had the whole inside of the stage to myself until we came within ten miles of Bethlehem when a dutch girl got in. I amused myself by knocking the flies, which were stiff from the cold, from the top of the stage and by changing from seat to seat partly to try which was the easiest and partly to keep myself warm. I thought it was an extremely long ride but like every thing else, I knew it had an end, which was a source of great consolation.

On my arrival here, I left my baggage at the tavern, and first went myself to see Mr. Leghman thinking perhaps he would not be ready to receive me. But I found him already and then I had my baggage brought up and took my lodging in my new home with the prospect of spending a very interesting winter. Whether I shall be agreeably disappointed in the prospect, I cannot as yet make any calculation.

As far as external comforts are concerned, I think I am very happily situated. I have a very comfortable room on the south side of the house fronting Market Street (but you must not suppose it the principal street). The room is carpeted and a table very suitable for use which I use, a mirror, and venetian blinds in the windows. Indeed, it is a rather more handsome room than most lawyers and especially young lawyers can procure. I have bought myself a coal stove – gave six dollars for it. I wanted to rent one for the winter but could not. Mr. Leyhman also gave me room in his secretary, which stands in my room, to put a portion of my books. My bed chamber is also a very comfortable room but it has no mirror in it, which is rather an inconvenience. But a young man who formerly occupied [the room] left a small one about as large as my hand which I use.

Mr. and Mrs. Leyhman (pronounced as if spelled Lamon) are both very kind. They talk very good English which makes it more agreeable to me, but perhaps I will not learn German so soon as if they couldn’t talk any English. The conversation in the family is altogether German. I sometimes feel like a fish out of water when sitting at the table and they talking German and I not understanding a word of it. But patience and perseverance, it is said, overcometh all things. But I think it require an extra quantity of both to understand German. I do not believe I would ever learn it by hearing them talk it merely for I cannot distinguish one word from another. But I think I can soon learn to read it.

I have taken two lessons yesterday and today. I am to take five lessons a week. I am so very much pleased with my instructor. He appears to be very sociable and desires to give me all the instruction he can, and appears greatly interested in my improvement. I hope he will continue with some zeal in which he has begun. He is one of the regular preachers for the town [and] is rather an elderly gentleman. His name is [Nathaniel] Leidel.

I have found Dr. Huebner who was so attentive to me when Edmund and I were here, still kind, and also a very agreeable companion – he quite a learned man and is very conversable. I spoke to him about putting up my tin. He said there would be nothing objectionable in it and seemed quite pleased with the idea, and also advised me to advertise in the papers of the County. He said as [he] rode about the county, he would tell the people that there was a lawyer in Bethlehem.

In former times, they would not let any person who was not a member of their society engage in any trade, occupation or profession here. But they have relaxed that rule.

I nailed up on the window shutter my tin yesterday morning, being the first lawyer that ever opened shop in Bethlehem. The sign was a matter of great surprise and astonishment to the natives. I could hear their remarks as they passed by. Some appeared to laugh at the idea of a lawyer doing any business in Bethlehem, and some seemed to think it an encroachment, and others could not understand what “attorney at law” meant. One boy read it and then said to his companion, “What is that good for?”

The second night that I was here, I was at the tavern when the supper bell rang talking to Mr. Dutch (whom I think you heard me speak about). He insisted on my taking supper with him, which I did, and got an introduction to his wife and daughter and spent the evening with them. His daughter played upon the guitar and he gave me a standing invitation to call and see them.

I want to hear from home very soon – at least by next Monday week. I would like you to send me the county paper. You can always send down on Saturdays so I can get it Monday, and also send me my paper whenever it has any foreign news in it.

When you go to Lancaster County, you can [tell] our friends that I have opened an office and if they have any business in Northampton County, I am ready to attend to it.