This letter was written by Hiram Burroughs Gray (1828-1849), the son of Russell Gray (1794-1859) and Hannah Jones (179x-1877) of New Fairfield, Connecticut. Hiram penned this letter at age 17 while teaching a select school in Rumson, New Jersey — just below Sandy Hook and west of the Shrewsbury Inlet. It appears that Hiram never married and died in Steubenville, Ohio four years later. Family memoirs described him as “a youth of high hopes and bright promise.”

Hiram wrote the letter to his cousin, Phebe A. Jones. Though I could not find any biographical information regarding her, she was undoubtedly a niece of Hiram’s mother, Hannah Jones. 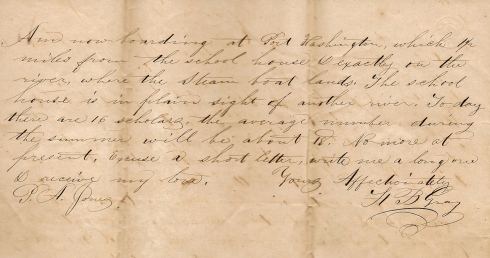 I suppose you were all some astonished when you heard I had gone to Jersey. But if you were to see me now you would be no less astonished to see the improvement in my health. I do not know that I have felt better in a year; though I am not quite as strong as last fall.

It is now about school time & scholars are gathering for study. I have now been in school 2 weeks & on an average have had about 16 scholars. My situation is very pleasant as it respects wither employers, scholars, or country. Have a fine sea breeze continually, & can see the vessels wafting along on the heaving billows almost any hour in the day. Nearly all the trees here of any kind are now in full bloom & the fields are as green as Connecticut fields are in the middle of May.

I came from the Seminary last night. They are all well there except little Hiram. He has been quite sick for a few days, but is now nearly well. I suppose [my brother] James is home by this time. Tell him I shall expect a letter from him soon. Grandmother wishes to know how Ann is. Tell him. Probably he knows by this time. Tell our folks I have not heard from Farley since he took his school. Wonder if they have received that letter I sent them. Write to me soon & tell me how you all are.

How is John & how does he get along alone? Give my love to him & tell him to write. His is Aunt Patty & Nancy? Give my love to them. How does David get along living at two places? Answer all these questions & direct to Eatontown, Monmouth County. I have not been a drop homesick yet but still I like to hear from there often. I have heard nothing from there yet.

Am now boarding at Port Washington, which is 1 1/2 miles from the school house & exactly on the river where the steam boat lands. The school is in plain site of another river. Today there are 16 scholars. The average number during the summer will be about 18.

No more at present. Excuse a short letter. Write me a long one & receive my love. Yours affectionately, — H. B. Gray