This short letter warns the recipient of the letter of a fraud being perpetrated upon unsuspecting operators in the tanning business by a Mr. Stem who was, in 1846, representing himself as the holder of a patent for a certain tanning frame. It seems that Mr. Stem was visiting various tanning establishments in western Pennsylvania and shaking them down for cash for the rights to use “his” patented frame.

The letter was written by Francis Shriver, son of Isaac Shriver and Polly Leatherman, who was born near Frederick, Md. He married Matilda Frysinger of Hanover, Pa. Shriver “acquired a practical knowledge of the tanning and currying business with his cousin Jacob Forney, of Hanover, serving an apprenticeship of four years prior to 1831. Subsequently, he was associated with his cousin, A. K. Shriver, of Union Mills, in the same business. In 1833 he commenced the business at Westminster on his own account, and followed it until the year 1858. He received the highest premium for leather awarded at the National Fair at Washington, D. C., in May, 1846; also, the highest premiums at the Franklin Institute Fairs of Philadelphia — fall of 1846 and ’47; [134] also, the highest awards at the Maryland Institute Fairs at Baltimore, in 1848 and ’49, the awards being for sole-leather weighing twenty-two pounds to the side which was tanned in four months, or one hundred and twenty days.

He never aspired to political preferment, but was elected, nevertheless, for six consecutive years (1850-56) mayor of the city of Westminster; also, elected, 1856, to the office of school commissioner of Carroll county for two years. In 1851 he was elected a director of the Mutual Fire Insurance Company, in Baltimore county, and served as such, and as general agent, until February, 1861, at which time he was made secretary and treasurer of said company, the duties of which offices he is efficiently discharging at the present time.

During the Civil War, 1861-65, he was of those who warmly espoused the cause of the Union. He was with the Delaware cavalry, under command of Major Knight, on the afternoon of the 29th of June, 1863, when sixty-four men under his charge met the advance of Stuart’s cavalry, eight thousand strong, at Westminster. He was in the midst of the fight, but fortunately escaped without injury, save a flash of gunpowder in the eye from a pistol shot in the hands of an officer. When the retreat was ordered he got off as fast as his horse “John” could carry him. Several men of both sides were killed and wounded in the skirmish.

Shriver sent the letter to John Nycum (1797-1878), who originally founded Ray’s Hill (Breezewood) when he bought land there in 1820. He is credited with having constructed many of the early Ray’s Hill stores and business establishments. 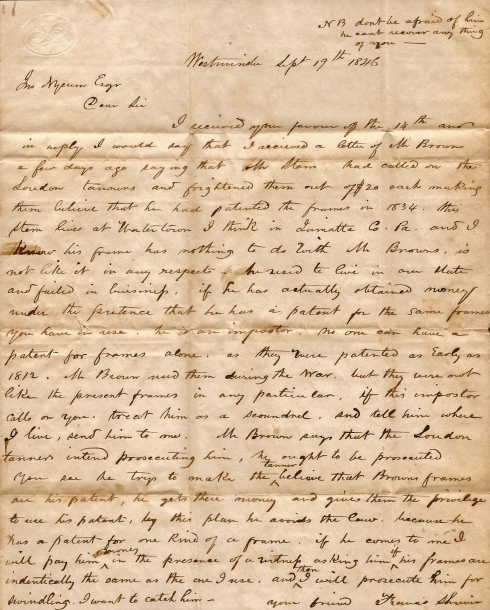 I received your favour of the 14th and in reply I would say that I received a letter of Mr. Brown a few days ago saying that Mr. Stem had called on the Loudon tanners and frightened them out of $20 each making them believe that he had patented the frames in 1834. This Stem lives at Watertown, I think, in Juniata County, Pennsylvania, and I know his frame has nothing to do with Mr. Brown’s — is not like it in any respects. He used to live in our state and failed in business. If he has actually obtained money under the pretense that he has a patent for the same frame you have in use, he is an imposter. No one can have a patent for frames alone, as they were patented as early as 1812. Mr. Brown used them during the War, but they were not like the present frames in any particular.

If this imposter calls on you, treat him as a scoundrel and tell him where I live; send him to me. Mr. Brown says that the Loudon tanners intend prosecuting him. He ought to be prosecuted. You see he tries to make the tanner believe that Brown’s frames are his patent. He gets their money and gives them the privilege to use his patent. By this plan, he avoids the law because he has a patent for one kind of frame. If he comes to me, I will pay him money in the presence of a witness asking him if his frames are identically the same as the one I use, and then I will prosecute him for swindling. I want to catch him.

N. B. Don’t be afraid of him. He can’t recover anything of you.

One response to “1846: Francis William Shriver to John Nycum”