This letter was written to Joseph Wright Spraugue (1802-1852) and his wife, Mary Alvira Lyons (1809-1879), both natives of Gill, Franklin County, Massachusetts, but residing in 1846 in Dexter, Washtenaw County, Michigan. 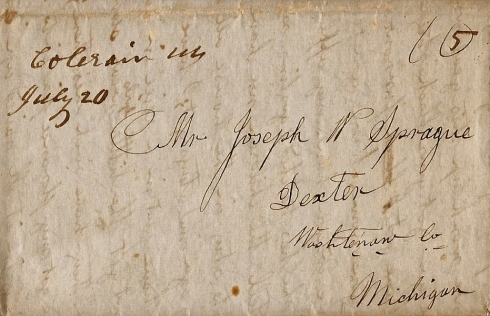 It has been a long time since I have written (I believe I most forget). The reason I have not wrote before was I had no news, nor have I now but thought I would write if it was not so important a communication, I don’t know whether I have written since Mr, Denin folks went or not. Father says I have, but I think not. We intended to send you a box of things by them and carried it over & they were gone. We felt bad enough & I presume you felt disappointed. Tell Adaline I have got de ___ in the box for her address and she need not worry, there will be enough for her if she don’t get this 2 years but we mean to send it when Amanda & her brothers go, We heard they would go in September. We shall try and have it there in time if possible.

Does Mr. Denin’s folks live near you? If so, are they good neighbors? We have heard that talked of coming here but we don’t believe it. We shall not expect you until we hear more. Has Mills been here or to Massachusetts yet? When he comes, do write. If it was not more than fifty miles, we would go & see him if he ever comes to Massachusetts.

When Eben gets a little older, he must come. You tell him to be laying up money for it now & have Joseph give you one dollar month and that lay that by and soon you will get money enough to bear your expenses. I intend to visit you some time. When, I don’t know, but guess when [our brother] Joel comes again & you know when that will be as well as I do, I believe I have written he is in a store in Pennsylvania with cousin David Lyons. He boards out yet. His wife stays at her fathers some. They live 10 miles from there so you see she is near her folks.

Our friends in Gill were well the last I heard. Elvin’s wife has got a daughter. It is very pleasing. Charles is married a cousin to his father. I guess he never will be rich boy. Folks live there. I suppose Eugenia Tenney is married & gone to Springfield. Perhaps I have written about it before. I write to you & Benjamin & Jerre & ______ & Joel & Monroe. I forget whether I write things to you or them so excuse me if I write things twice.

I sent you a paper with Maria’s death. She had a long and a most painful sickness. She has been sick ever since last September. Her disease was inflammation on the bladder. I suppose it is dreadful, dreadful. I have not heard what Benjamin is going to do. Whether he will breakup housekeeping or not. Perhaps he will and go to brother Jerre’s to board, but I don’t know. He must be very lonely, poor brother, but he is a Christian I trust & he will feel to bow in submission to God and we have reason to think she is far happier than she could be in this wicked world. O may you & I and all the rest be prepared to meet her in the regions of bliss.

I had a paper from [our brother] Monroe. He is well. I don’t hear from him often. Joel seldom writes [but] not as often as you do. You know he has somebody to think now beside us. Monroe does [not] often write but sends papers occasionally. I should not be surprised if Monroe should be married one of these days. He has got a lady out there where he lives.

Thompson’s health is poor. We are some afraid he will have the consumption but hope not, One of Aunt Peggy Shearer’s sons is most gone with the consumption. He cannot live long. Grandmother Miller is well. She is very deaf & cannot see as well as she could. She cannot read or knit any so you may judge she is some trouble. She frets some but we don’t notice it at all.

We called Friday & Saturday — July 10 & 11 — the hottest days we have had this year or for many years. I thought I was sick but come to have it cooler I feel pretty well. Mother sas if you will write to her, she will to you, so your next letter you must write to her & direct it to Father. She thinks hard that you don’t never write her a letter. I think she is getting childish. You must always mention her in all your letters when you write to me.

We have been spinning. Have got done; spun one piece 90 pounds of wool is all we work up this year. We have spun a piece of sheep’s black. Have you got your black sheep yet> We are making cheese. Have made 4. We have got furrow cows. Don’t have much milk. How many cows have you now? Have you ever made any cheese since you have been there? Do you have any apples yet? We have set a hen on goose eggs and she has hatched 3 goslings so I expect we shall make beds just now. Tell the children we have got one of the pretty white doves. It would like to stay in the house all the time. It came here about 4 or 5 years ago and stays yet. I have got me no new dress this summer. If you have, put in a piece in your next letter. Has Rosaline got a bonnet yet? The little girls wear slab ones or Bonnets with posteboard. I presume they have such ones there. Gipoyes are the style for all now. I have got my Florance fix into one. The box remains with the things in it all nailed up — some sand which I loved, palm leaf &c. I guess you had better write to Losensa just get for if you send it to us and round so it will be a costly letter. You may write sometime to me and write part to him & then I will write it off in some of my letters to him. I had a letter from him this spring. He has been sick but got better or well when he wrote.

Aunt Polly & her husband have been here. She has got a smart man, I can tell you. I shall send you papers occasionally but shall not write often if I have no news. Do write to mother soon. Write as often as you please. Send papers when you have a good story. I will too. — H. A. Lyons

Brother Joseph, you must write more oftener. Elvin & Esther must do the same, How do you like the dispatch? Had you rather have the Greenfield paper? Send papers often. Don’t be stingy of them.