This letter was written by William Thomson to Franklin Mills (1816-18xx) who was born in Connecticut. Franklin was married to Mary Thomson (1830-18xx) of Ohio. 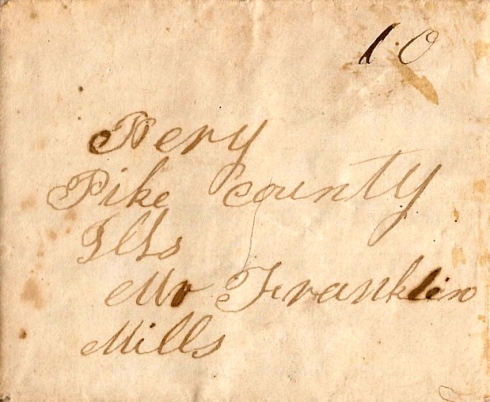 We received yours of the 25 which gave us much satisfaction. But I must answer it with a heavy heart. On Thursday the 13, just as the sun was setting, Sarah Jane departed this life leaving us to mourn her loss, but not without hope for she died in the triumph of a living faith and we trust is gone home to glory though long she was afflicted and long did we have to consider upon it. It was hard parting at last though we have a blessed hope that our temporal loss will be for her eternal gain. She continued rational in her faculties to the last and spoke not fifteen minutes before she died. She was composed and resigned to her death. Said she was only sorry for Alexander and me to be left in this lonesome world.

Her sufferings was about the same they use to be. She failed so little through the season one could hardly see her any worse on to about 4 weeks before her death. She commenced to fail and lost all her strength in that time and died away easy, closed her eyes and folded her hand s in death. I said to her a short time ago, would she like to go home to Illanoy. Oh yes, she said, but she did not care very much. Alexander is well. I have not very good health this winter. I have something like bad cold and can’t get clear of it. We have had a very open winter here this season except a few days. The folks here want me to leave Alexander but Sarah some time before she died spoke about it. She requested me to take him along with me. She said no doubt they would use him well, but she would rather he was with me. When I think of coming home and leaving him here, I can hardly bare the thought, but we allow to start some time betwixt now and the middle of next month if I can arrange my business. Nothing more. — William Thomson