This business letter was written by Anthony Thatcher (1782-1844), who held the office of cashier in the New London Bank for 26 years (1807 to 1833. Anthony was the son of Capt. John Thatcher of Stratford, Connecticut.

There are too few clues contained within this letter to confirm the identity of the Samuel Welles to whom this letter was written. There were several by that name in the Glastonbury vicinity. However, I feel pretty confident it was Samuel Welles (1754-1834) who lived his entire life in Glastonbury. He was a shipping merchant and politician but was probably best known for being the father of Gideon Wells (1802-1878) who served in Lincoln’s cabinet as Secretary of the Navy.

My transcription may be wrong but I believe a Mr. Hale is referred to in the letter as well. Samuel Welles was married to Ann Hale. She died in 1816; perhaps this letter had to do with stock Welles shared with the Hale estate. 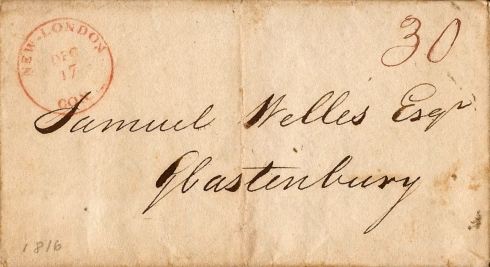 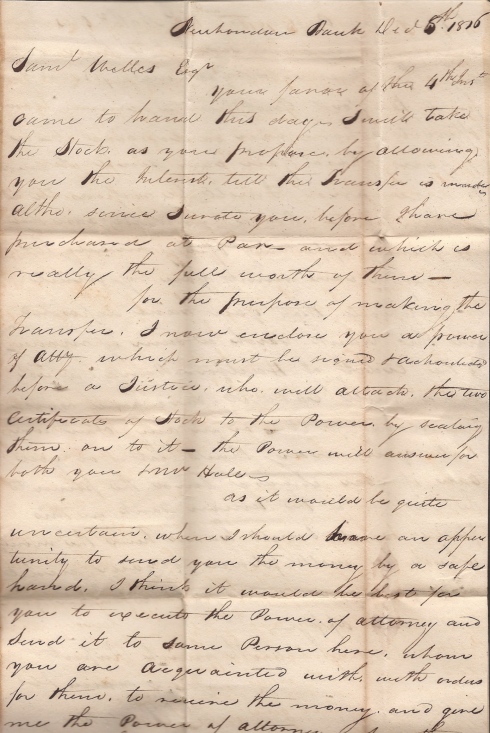 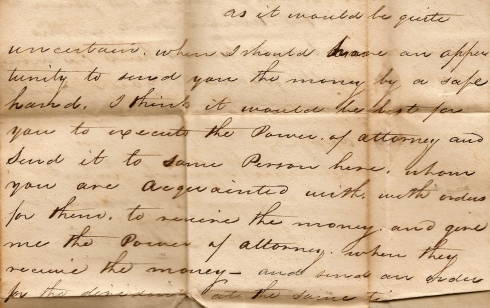 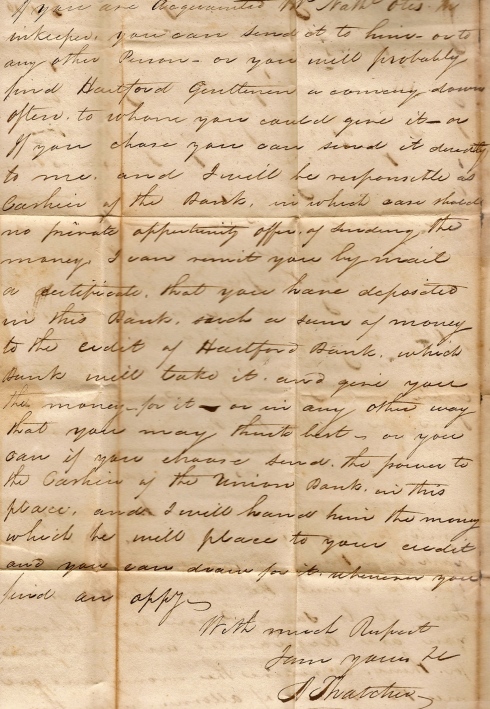 Your favor of the 4th inst came to hand this day. I will take the stock as you propose by allowing you the interest till this transfer is made altho since I wrote you before, I have purchased at par – and which is really the full worth of them.

For the purpose of making the transfer, I now enclose you a power of attorney which must be signed & acknowledged before a Justice, who will attach the two certificates of stock to the Power by sealing them on to it. The Power will answer for both you & Mr. Hale’s.

As it would be quite uncertain, when I should have an opportunity to send you the money by a safe hand, I think it would be best for you to execute the Power of Attorney and send it to some person here, whom you are acquainted with, with orders for them to receive the money and give me the Power of Attorney when they receive the money – and send an order for the __________ at the same time.

If you are acquainted with Mr. Nathaniel Otes, my innkeeper, you can send it to him, or to any other person. Or you will probably find Hartford gentlemen a coming down often to whom you could give it. Or, if you chose, you can send it directly to me and I will be responsible as cashier of the bank, in which case, should no private opportunity offer of sending the money, I can remit you by mail a certificate that you have deposited in this Bank such a sum of money to the credit of Hartford Bank, which bank will take it and give you the money for it – or in any other way that you may think best. Or you can, if you choose, send the Power to the Cashier of the Union Bank in this lace and I will hand him the money which he will place to your credit and you can draw for it whenever you find an opportunity.

With much respect, I am yours &c. – A. Thatcher