In this letter, 25 year-old Samuel Franklin Bell writes to his 22 year-old brother John Lindsey Bell from Middletown, Connecticut. At the time, Samuel was nearing the completion of his Freshman year at Wesleyan University — a Methodist college founded in 1831. Samuel and John Bell were the sons of Samuel Bell (1785-1870) and Olive Lindsey (1791-1884), of Chester, Massachusetts.

According to the university catalog, Samuel F. Bell left Wesleyan University during his sophomore year (1837) and completed his degree (with honors) at Union College in 1841 while serving as the Principal of Rhinebeck Academy — a classical school — from 1838 to 1841. He married Minerva Crowell, a sister of Rev. Loranus Crowell (Wesleyan University Class of 1840). Samuel and Minerva had a daughter named Margaret H. Bell before he died in November, 1841. In 1881, Minerva Bell had remarried to H. M. Ring and resided in Harmar, Washington County, Ohio. His daughter married Dr. Henry Charles Haskell and served as a missionary to Turkey.

According to family genealogy records, Samuel Franklin Bell was born 27 January 1811 and died 25 November 1841. He was baptized on 17 May 1820. Samuel is buried in the Rhinebeck Association Cemetery #1 in the Village of Rhinebeck, Dutchess County, New York.

The other brother mentioned in this letter is Charles Merrick Bell. He was born 19 June 1822 and died 18 September 1895.

The letter follows. Click on the images to enlarge them. 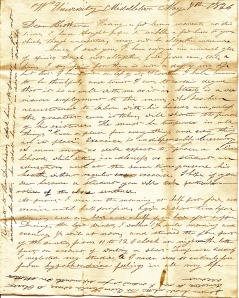 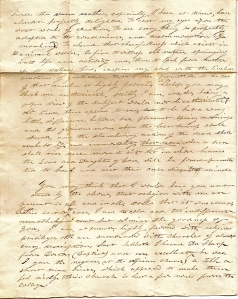 Having a few leisure moments at this time, I have thought proper to scribble a few lines to you, which, though unexpected, may not be altogether undesired.

Since I last saw you, I have enjoyed an unusual glee of spirits though not altogether free from care, toil; a pair, I say pair for there is not a day of my life but that I have more or less of it. However, I have reason to be thankful and trust I am to a certain degree that it is as well with me as it is. Study is a wearisome employment to the man, who has been accustomed to labor with his hands, and, unless the greater care is taken, will shorten the period of his existence. He must be temperate in all things. “Have a place for everything and everything in its place.” Exercise is indispensably necessary. A man may as well expect to procure a livelihood while sitting in idleness, as a student an education and at the same time preserve his health without regular exercise. I hope if you ever become a student, you will take particular notice of the above sentence.

At present, I rise in the morning at half past four and exercise until half past five, again a short time before dinner, and one hour and a half of an hour after supper. During the last winter, I walked 1 ½ mile morning and evening, ½ mile at noon, and studied the same part of the winter from 11 to 12 o’clock at night – the latter part on account of writing a short Temperance address. I neglected my studies and I never was so entirely free from hypochondriac feelings in all my life.

Since the warm weather especially, I have at times been almost perfectly delighted. To cast my eyes upon the vast works of creation, to see every thing so perfectly adapted to the convenience and accommodation as mankind. To observe that cheerfulness which exists in the animal world so fine. To witness all nature springing into life and activity and, them, to look from nature up to a nature’s God, inspires my soul with the livelier emotions of gratitude. Then I am permitted to be one of that number so highly favored. Perhaps you may think me enthusiastic – possibly I am, and, who, having a proper view of the subject would not be enthusiastic?  At times there appears to me, to be but a very little difference between our pleasant spring mornings and that glorious morn when the last trumpet shall sound, and the slumbering nations of the dead shall awake to life and immortality. That morn when a sun shall rise never more to sit, but in whose beams the sons and daughters of God will be forever permitted to bask, and near their once disquieted minds.

You may think that I would have you understand by the above that religion with me at present is all and in all. Would that it was even so. But this is not the case. I am too cold and too indifferent. Nevertheless, I can’t but admire the goodness of God. I am at present highly favored with religious privileges. We are surrounded with churches of almost every description. Last Sabbath I heard [Rev.] Dr. Sharp from Boston (Baptist) and excellent he was. I gave the negroes (at the African Church) a talk a short time since, which appeared to make them feel nicely. Their church is but a few rods from the college.

I had a very pleasant school last winter and am offered $35 per month for the next winter. I think if you intend to teach school next winter you will do well in this region, or better than you can at home. I know of one or two schools on the Cape which I think I can get for you if you will teach. They will pay from $20 to 23 per month. If you will teach one of them, I wish you to write me immediately. I understand that you are with Br. Wright and conclude, therefore, that you do not intend to pursue a sedentary life.

And now a few questions before I close. How does Olds get along since he was married? Is the Deacon going to leave Norwich this spring? How do they get along at Mr. [Elijah] Churchills? Has he settled his difficulty with Br. Wright? How is Wares and his boy? My love to him.

How is Br. Dickison prospering in the preaching business? Deniques on, in fine. How does father make out as to respects his fodder and how are the cattle and sheep? I learned from his letter that the Temperance ticket prevailed in Chester and that he was elevated to a responsible officer. I hope that it may prevail in every place and that the scourge of nations may soon cease to exist in America.

I am quite well pleased with my situation but shall be under the necessity of studying very hard in order to keep with my class. I expect to go in the sophomore class next fall with two studies. There are at present in college about 120 – a large number for so good of an institution. The prospect is that it will eventually be one of the best colleges in U.S.  That you may see what a part of my business is, I will give you one or two verses of the first chapter of John translated into Latin which was a part of my last week’s composition. In principis, verbum enat, et verbum enat/ In English, In the beginning, word was, and the word was… We barely write the Latin. I find it easy.

Give my respects to Bro. Nathan Wright and family, Jesse Wright and family, Bros. Smith, Ambrose, Wand and all the good people in Middlefield & Chester who inquire after their old friend, and write me how you like the preacher, — S. F. Bell [Samuel Franklin Bell]

To Father & Mother: I received your letter the next day after it was mailed & was rejoiced to hear from you for I did not know but that your cattle (if not yourselves) were in a suffering condition having heard so many accounts of the distress prevailing among you on account of a want of hay. But I am happy to learn it is as well with you as it is. S.F.B.

To Aunt: I have often thought of you during the cold winter but was happy to learn from Father that you was as common. I suppose you will be ready to ask when I shall come home? If nothing happens, as soon as the spring. I cannot before. I am well. S.F. B.

To [my brother] Merrick: I suppose you are engaged about this time in taking care of the lambs and cutting wood for summer, preparing the ground for the summer, &c. I hope you will have good success. I expect to bring that testament when I come home. What one will suit you? I have a little boy named after me down at Canton (S. B. Upham). I had borrowed him a bible. Don’t work to hard. S.F.B.

Respects to Br. Dickison. Ask him to pardon me for now answering his letter. He should have one as soon as possible.

Let me know whether the Zion’s Herald comes to Chester directed to me. I ordered it for six months on mother’s account. 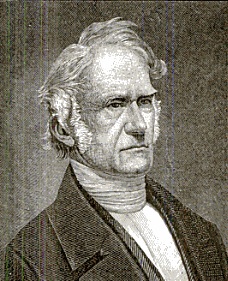 The “Aunt” may have been Martha Bell, older sister of Samuel’s father. Martha was born 22 June 1781.

The “African church” where Samuel preached was the Cross Street A.M.E. Zion Church in Middletown, CT.

The “Jesse Wright” family of Chester, Massachusetts probably refers to Jesse Wright (1793-1849) and his wife Dorothy Skinner. He was also active in the Methodist Society.

Mention is made of the Wares family, They are probably descendants of Elias Wares (1754-1819) who was a Revolutionary war soldier from Glastonbury CT settling in the area.