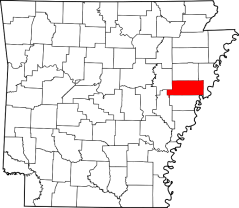 This letter was written to Col. Roger Quarles (1772-1856), the son of William Quarles and Mary Mills.

Hurricane Hall was built in the 1790s in Fayette County, Kentucky by David Laughed on the Lexington-Georgetown Pike. It was purchased in 1803 by Colonel Roger Quarles. Quarles with his wife, Jane Rodes Thomson Quarles and their 2 children came from Virginia. Colonel Quarles was a gentleman farmer. The Fayette County Kentucky tax list in 1826 listed 1,563 acres (633 ha), 30 slaves, 33 horses and 1 pleasure carriage.

Hurricane Hall has some rather interesting features. The front door opens into a 15-foot-wide hall (4.6 m). One of the most appealing decorative features is the French scenic wallpaper in the parlor and hallway to commemorate the wedding of their daughter, Sarah Anna Eliza Quarles to William Z. Thomson in 1817. 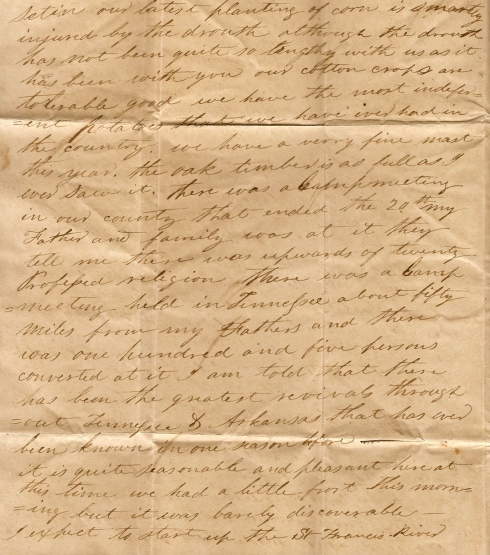 I have embraced the opportunity of writing you a few lines which leaves me in good health and I hope they will reach you enjoying the same blessing. My health has been verry good ever since I left your house. I got home safe with my negroes the 21st inst. I had a verry tiresome time of it on the river. I was ten days in the Ohio River. We was detained in consequence of low water. When I got home, I found my Father and Family all in good health and our neighborhood is generally tolerable healthy.

Serine has behaved herself verry well since I got home and Jerry attends to his business as well as I could wish. And they all are apparently verry well satisfied. I regret that I have nothing worthy to communicate at this time but hope I will be able to write a more interesting letter next time.

I will now give you a full description of our crops in this country. Our earliest planting of corn is verry good as it made itself before the drouth set in. Our latest planting of corn is smartly injured by the drouth although the drouth has not been quite so lengthy with us as it has been with you. Our cotton crops are tolerable good. We have the most indifferent potatoes that we have ever had in this country. We have a verry fine mast this year. The oak timber is as full as I ever saw it.

There was a Camp Meeting in our county that ended the 20th. My Father and family was at it. They tell me there was upwards of twenty professed religion. There was a Camp Meeting held in Tennessee about fifty miles from my Father’s and there was one hundred and five persons converted at it. I am told that there has been the greatest revivals throughout Tennessee & Arkansas that has ever been known in one season before.

It is quite seasonable and pleasant here at this time. We had a little frost this morning but it was barely discoverable.

I expect to start up the St. Francis River in a few days to hunt timber and if I should be fortunate enough to find timber for sale convenient to the river, I shall but it and if I should not, I shall cut enough for one or two fine rafts and run them to New Orleans.

I shall like to hear from you as soon and as often as convenient. Direct your letter to St. Francis County, St. Francis P. O., Arkansas. Give my respects to Mr. Thomson and family and tell Henry that I would be glad to receive a letter from him as soon as it is convenient. Give my respects to Mr. Leak & Mr. Brown and write how they are both doing.

I have nothing more worth relating but will forever remember you for your kindness to me in your house. I remain your sincere and affectionate friend, — Abijah Allen