This letter was written by David Damon (1787-1843), son of Aaron Damon (1761-1828) and Rachel Griffin (1761-1839).  David Damon was married to Rebecca Derby (1787-1852) and they were the parents of at least seven children born between 1816 and 1829. David was a Unitarian minister. He graduated from Harvard Divinity School in 1811. He also helped found Cambridge’s Harvard Lyceum, studied theology at the Andover Theological Seminary, and was pastor in Lunenburg, Massachusetts, from 1815 to 1827. He was pastor of the West Cambridge Unitarian Church (now the First Parish Unitarian Universalist Church of Arlington) from 1835 to 1843. In 1841, he gave the Dudleian lecture at Harvard.

The letter was addressed to David’s and Rebecca’s oldest child, Norwood Damon (1816-1884) who was born in October 1816 in Lunenburg, Massachusetts – making him not yet 16 at the time. It appears he was on his way to Framingham, Massachusetts, with the hope of obtaining a situation as teacher in a select school. Norwood went on to a useful career as a Unitarian minister. 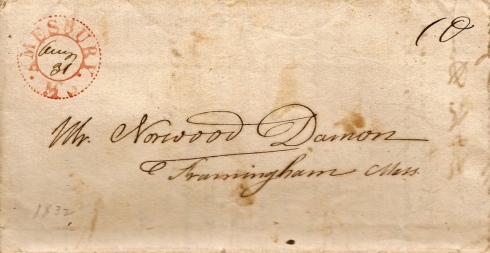 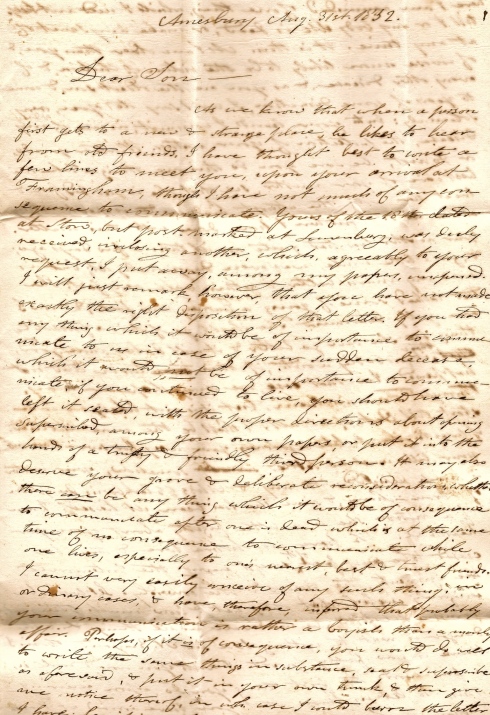 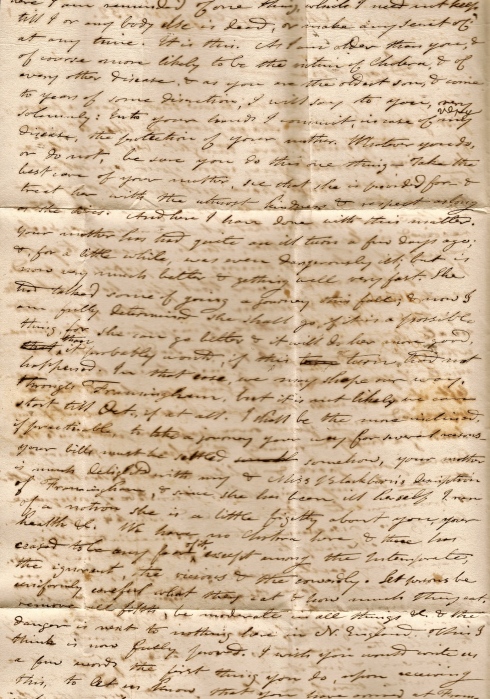 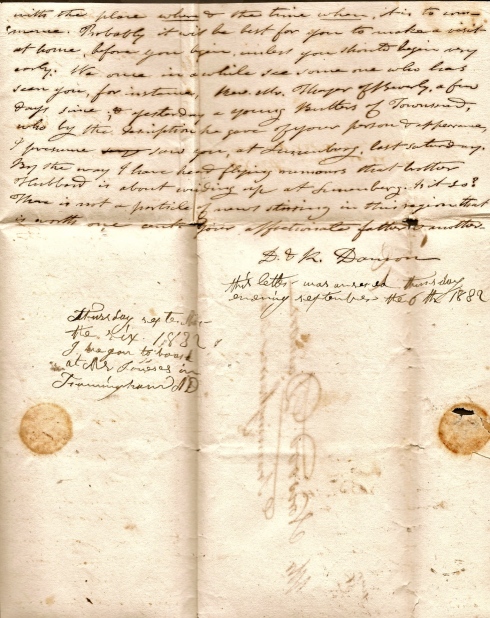 As we know that when a person first gets to a new & strange place, he likes to hear from old friends, I have thought best to write a few lines to meet you upon your arrival in Framingham, though I have not much of any consequence to communicate.

Yours of the 18th dated at Stow [Massachusetts], but postmarked at Lunenburg [Massachusetts], was duly received, inclosing another, which, agreeably to your request, I put away among my papers unanswered. I will just remark, however, that you have not made exactly the right disposition of that letter. If you had anything which it would be of importance to communicate to us in case of your sudden decease which it would not be of importance to communicate if you continued to live, you should have left it sealed with the proper directions about opening superscribed among your own papers, or put into the hands of a trusty & friendly third person. It may also deserve your grave & deliberate reconsideration whether there can be any thing which it would be of consequence to communicate after one is dead which is at the same time of no consequence to communicate while one lives – especially to one’s nearest, best & truest friend. I cannot very easily conceive of any such thing in ordinary cases & have therefore inferred that probably your communication is rather a boyish than a manly affair. Perhaps if it is of consequence, you would do well to write the same things in substance, seal & superscribe as aforesaid, & put it in your own trunk, & then give one notice thereof, in which case I could burn the letter I have; for it is possible my papers may be rummaged over without my knowledge, or I am as likely to die as you are, & probably more so, & in that case all the papers I leave would immediately be examined by others.

And here I am reminded of one thing, which I need not keep till I or any body else is dead, or make any _____ of at any time. It is this. As I am older than you & of course more likely to be the victim of Cholera & of every other disease, & as you are the oldest son, & come to years of some direction, I will say to you very solemnly: Into your hands I commit, in case of my disease, the protection of your mother. Whatever you do or do not, be sure you do this one thing – take the best care of your mother. See that she is provided for & treat her with the utmost kindness & respect as long as she lives. And here I have done with this matter.

Your mother has had quite an ill turn a few days ago; & for a little while, was even dangerously ill, but is now very much better & getting well very fast. She had talked some of going a journey this fall & now I am fully determined she shall go if it is a possible thing, for she can go better & it will do her more good than it probably would if this turn had not happened. In that case, we may shop our way through Framingham, but it is not likely we can start till October, if at all. I shall be the more inclined, if practicable, to take a journey your way for several reasons – your bills must be settled somehow, your mother is much delighted with my & Miss Blackburn’s description of Framingham, & since she has been ill herself, I have a notion she is a little figetty about you, your health &c.

We have no Cholera here & there has ceased to be any fear of it except among the intemperate, the ignorant, the vicious & the cowardly. Let persons be uniformly careful what they eat & how much they eat, remove all filth, be moderate in all things &c. & the danger is next to nothing here in N. England. This, I think, is now fully proved.

I wish you would write us a few words the first thing you do upon receiving this to let us know that you have arrived at Framingham, where you are to board, whether you have engaged a school, where it is, & if so, when it is to begin. If you have not engaged one, let us know as soon as you have, with the place where & the time when, it is to commence. Probably it will be best for you to make a visit at home before you begin unless you should begin very early. We once in a awhile see some one who has seen you — for instance, Rev. Mr. [Christopher T.] Thayer of Beverly a few days since. And yesterday a young Butters of Townsend, who by the description he gave of your person & appearance, I presume he saw you at Lunenburg last Saturday. By the way, I have heard flying rumours that brother [Rev. Ebenezer] Hubbard is about winding up at Lunenburg. Is it so? There is not a particle of news stirring in this region that is worth one cent.

[Editor’s Note: Norwood wrote at the bottom of this page:]

Thursday, September the Six, 1832. I began to board at Mr. Joneses in Framingham.