This letter was may have been written by Jacob Winter (1780-1843), the husband of Catherine Miller (1785-1855). There is insufficient information in the letter to confirm his identity. He is possibly a descendant of the German family Winterheimer who settled in this part of Ohio in the 1700s.

Jacob wrote the letter to Henry B. Curtis, (1799 – 1885), perhaps the individual who had the greatest single role in developing and shaping Mount Vernon and Knox County, was born November 28, 1799, near Champlain, New York and came to Newark, Ohio, in 1809 with his parents. When he was 17, he came to Mount Vernon to study law under his older Brother, Hosmer Curtis. Hosmer, also prominent in local history, later moved on west to Keokuk, Iowa, where he died in 1874 at the age of 85.

Henry spent the rest of his life in Mount Vernon and was a lawyer, banker, churchman, city developer, and civic leader. In 1872 he gave a dinner at Round Hill, the family home, at which he announced his retirement from the active practice of law, having completed 50 years at the bar. He died in 1885.

Among his contributions to Mount Vernon and Knox County: he liquidated the tangle affairs of the Owl Creek Bank and helped start the bank which became the First Knox National Bank of today; he helped Bishop Philander Chase choose the site for Kenyon College; helped bring railroad service to the county. Curtis Hotel, Curtis Street, Ann Street, and Elizabeth Street are memorials to his work as a developer.

He built the home which stood at 101 North Main Street from 1836 until it was razed for construction of the YMCA in 1965. His daughter Elizabeth and her husband, John G. Plimpton, started in 1853 to build the home on Round Hill, at East Lamartine and McKenzie Streets, and after Mr. Plimpton died, Mr. Curtis took over the work, completed the home about 1860, and moved there about 1870, to remain until his death. Mr. Curtis was one of the organizers of St. Paul’s Episcopal Church and for many years a warden and vestryman. 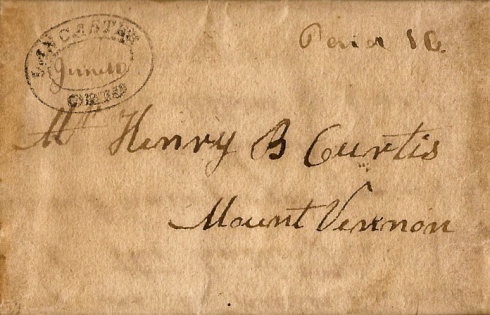 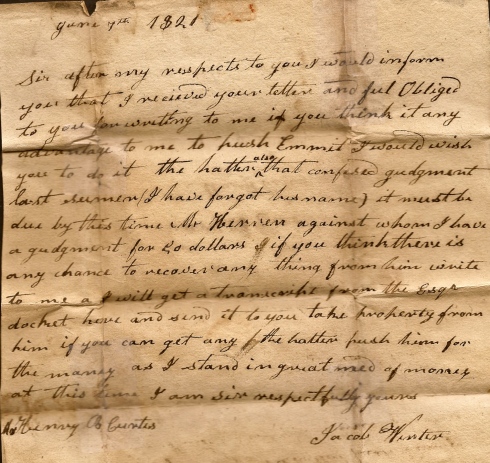 After my respects to you, I would inform you that I received your letter and feel obliged to you for writing to me. If you think it any advantage to me to push Emmit, I would wish you to do it. The hatter also that conferred judgment last summer (I have forgot his name). It must be due by this time. Mr. Herren against whom I have a judgement for 50 dollars. If you think there is any chance to recover anything from him, write to me & I will get a transcript from the Esqr docket here and send it to you. Take property from him if you can get any from the hatter, push him for the money as I stand in great need of money at this time.

I am, sir, respectfully yours, — Jacob Winter