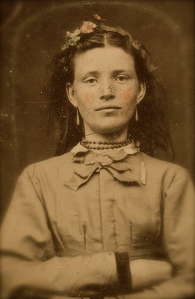 This letter was written by Ingeboe Anderson (1835-18xx) who was a 14 year-old student in a school kept by Perley Balch (1809-1881) in Lowell, Massachusetts. Perley was married to Susan H. Glazier in 1836. Their child, Mary Abby Balch (b. 1844) is mentioned in this letter as suffering from the whooping cough.

This letter was written to 8 year-old Mary Brackett (1841-19xx) of Sturbridge, Massachusetts — probably a former student in Balch’s school who returned home to Sturbridge due to illness. 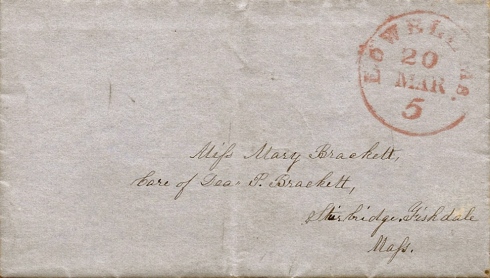 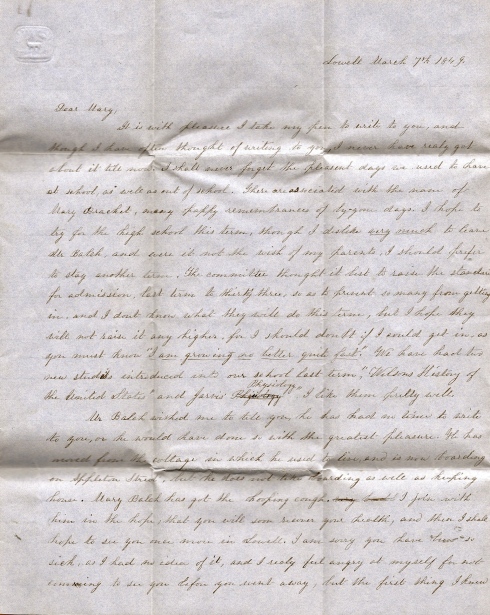 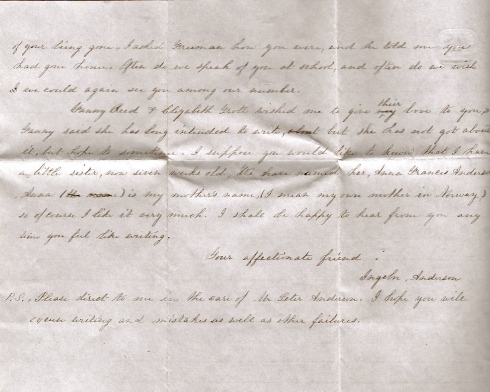 It is with pleasure I take my pen to write to you, and though I have often thought of writing to you, I never have really got about it till now. I shall never forget the pleasant days we used to have at school, as well as out of school. There are associated with the name of Mary Bracket, many happy remembrances of by-gone days.

I hope to try for the high school this term, though I dislike very much to leave Mr. [Perley] Balch, and were it not the wish of my parents, I should prefer to stay another term. The committee thought it best to raise the standard for admission last term to thirty three, so as to prevent so many from getting in, and I don’t know what they will do this term, but I hope they will not raise it any higher for I should doubt if I could get in as you must know “I am growing no better quite fast.” We have had two new studies introduced into our school last term, “Wilson’s History of the United States” and Jarvis’ “Physiology.” I like them pretty well.

Mr. Balch wished me to tell you he has had no time to write to you, or he would have done so with the greatest pleasure. He has moved from the cottage in which he used to live and is now boarding on Appleton Street, but he does not like boarding as well as keeping house. Mary Balch has got the whooping cough. I join with him in the hope that you will soon recover your health, and then I shall like to see you once more in Lowell. I am sorry you have been so sick as I had no idea of it, and I really feel angry at myself for not coming to see you before you went away. But the first thing I knew of your being gone, I asked Freeman how you were, and he told me you had gone home. Often do we speak of you at school, and often do we wish we could again see you among our number.

Fanny Reed & Elizabeth Grott wished me to give their love to you, and Fanny said she has long intended to write, but she has not got about it, but hope to sometime. I suppose you would like to know that I have a little sister, now seven weeks old. We have named her Anna Frances Anderson. Anna is my mother’s name (I mean my own mother in Norway) so of course I like it very much. I shall be happy to hear from you any time you feel like writing.

P. S. Please direct to me in the care of Mr. Peter Anderson. I hope you will excuse writing and mistakes as well as other failures.