This letter was written by Rhobe (Sarles) Knight (1885-1852) and Dorcas (Sarles) Arnold, the daughters of Joseph Sarle, who left their family in Cranston, Rhode Island to move to New York State after they married, ca. 1805-1810. Both George and Rhobe Knight and Ichabod and Dorcas Arnold bought land to clear and farm near Ogdensburg in present-day St. Lawrence County. Knight also worked as a cooper, while Arnold operated a small-scale lumbering operation.

The Knights had five children: Caroline, Emmeline, Luvana, Lucy Almira Knight (whose birth is announced in this letter) and one other. It appears that Caroline was the oldest. The marriage was an unhappy one, and the difficulties began early on when George left his family and joined the army during the War of 1812. He seems never to have been a steady household presence after that, taking off for extended periods without making provision for Rhobe and the children, leaving legal and financial messes behind him. Parvis Round, a hired man who moved in during Knight’s military service, eventually took over the property, as well as the role of father and husband, it would seem. He was at first a suitor of Rhobe’s sister Luvana, but when George Knight died in 1826 there was speculation that his widow and Round, who had evidently cohabited all these years, would marry.

Though both families were poor, the Arnolds seemed to have a better time of it, although Ichabod was frequently quite ill and bore up by dosing himself with opium. The Arnolds had many children; the birth of Polly Arnold being announced in this letter. Anna Arnold Cole was the oldest.

Dorcas Arnold was a fervent Methodist. Her religious enthusiasm was not shared by sister Rhobe, and this may have been the beginning of a rift between them which opened wider when their husbands began arguing over money and land titles and wound up in court over it. Dorcas blamed her sister for George’s estrangement, and even went so far (according to Rhobe) as to accuse her of having children by men other than him, maintaining that Knight was physically unable to father a child. 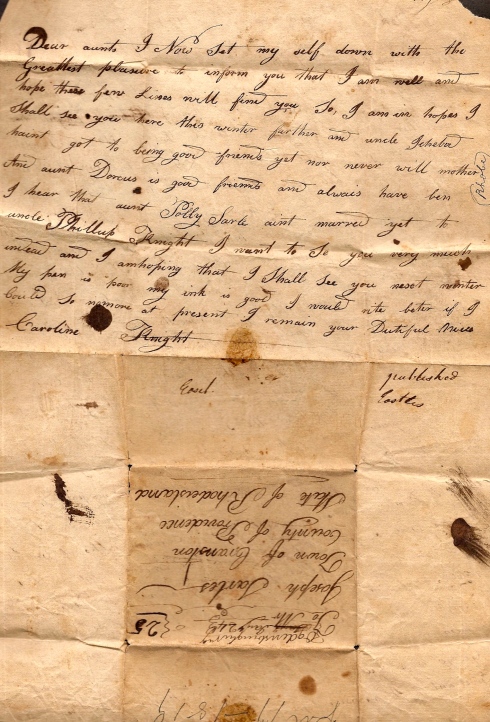 I now set my self down with the greatest pleasure to inform you that I am well at present and all the rest of the Family. I have got another girl and I call it Lucy Almira Knight. And it was born the 25 Day of November. Ichabod [has a] daughter and it was born New Year’s Day, and he calls it Polly. Miriah Cole Caroline was down there all last week. I expect Anna here the first chance she can get. Caroline and Emmaline goes to school this winter. I have got me a new lamb and I have wove one hundred and fifty yards since the first of September last. I have wove two pieces since the baby was born and have got in a piece of thirty yards long and made two coats.

I now set myself down with the greatest pleasure to inform you that I am well an hope these few lines will find you too. I am in hopes I shall see you here this winter. Father and Uncle Ichabod haint got to being good friends yet nor never will. Mother and Aunt Dorcus is good friends and always have been. I hear that Aunt Polly Sarle ain’t married yet to Uncle Phillip Knight. I want to see you very much indeed, and am hoping that I shall see you next winter. So no more at present, I remain your dutiful niece, — Caroline Knight