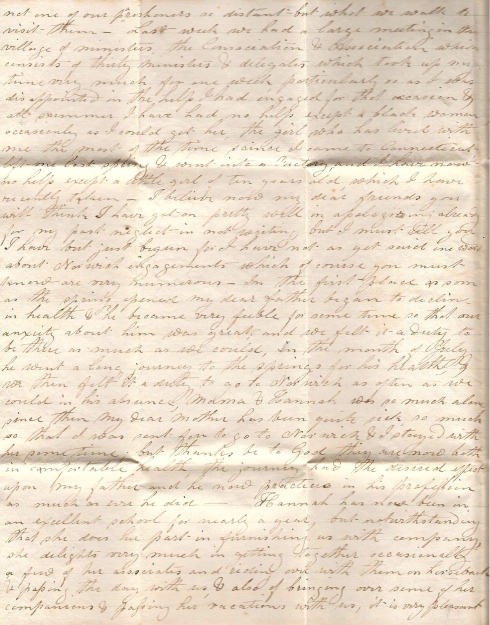 I never like to receive letterers prefaced with long apologies. Neither do I like myself when writing to a friend to commence my letters with long, tedious apologies for my negligence in not answering them sooner, but when I look back and find your last letter, my dear Miss White, dated May 14th, and yours my dear Mrs. White dated August 3d — letters which are so highly prized by me — I do feel as though some excuse was absolutely necessary. And when you hear the true cause of my silence, I believe you will be ready to acquit me.

It is true that this is the first leisure moment since I received your precious letters that i have felt sufficiently composed to sit down and address friends so dear to me as yourselves. I don’t know but I have mentioned to you before that Jewett City is a place always very much frequented with company and strangers during the summer season. There has not been a week during the whole summer but what there has been strangers in this village. It is expected here that we should visit them and be visited by them. Our people — when they are expecting their friends from a distance — call to see us on purpose to inform us that they are coming and to engage us to call and see them as soon as they arrive, and our visiting is by no means confined to this village. We are continually receiving pressing invitations from the people of Plainfield, Griswold, Lisbon, & Hanover to visit them. Plainfield is an adjoining town and you will probably recollect the native place of Mr. Perkins, and of course he has many friends there who it is very pleasant & gratifying to him to visit. But the visiting part of our duty among this people (if it can be called a duty), is to Mr. Perkins & myself by no means the pleasantest part — particularly ceremonial visits. They have become quite tedious to us. It is very pleasant to us to call frequently on the people of our parish, as we often do. We are so compact that we can make a great number of calls in an afternoon. There is not one of our parishioners so distant but what we walk to visit them.

Last week we had a large meeting in the village of ministers. The ______tion & Association, which consists of thirty ministers & delegates, which took up my time very much for one week — particularly so as I was disappointed in the help I had engaged for that occasion. And all summer I have had no help except a black woman occasionally as I could get her. The girl who has lived with me the most of the time since I came to Connecticut left me last spring & went into a factory, & I have now no help except a little girl of ten years old, which I have recently taken.

I believe now, my dear friends, you will think I have got on pretty well in apologizing already for my past neglect in not writing, but I must tell you I have but just begun for I have not as yet said one word about Norwich engagements — which of course you must know are very numerous. In the first place, as soon as the spring opened, my dear father began to decline in health & he became very feeble for some time so that our anxiety about him was great, and we felt it a duty to be there as much as we could. In the month of July, he went a long journey to the springs for his health & we then felt it a duty to go to Norwich as often as we could in his absence. Mama & Hannah was so much alone since then. My dear mother has been quite sick so much so that I was sent for to go to Norwich & I stayed with her some time. But thanks be to God, they are now both in comfortable health. The journey had the desired effect upon my father and he now practices in his profession as much as ever he did.

[Our daughter,] Hannah has now been in an excellent school for nearly a year, but notwithstanding that she does her part in furnishing us with company, she delights very much in getting together occasionally a few of her associates and riding over with them on horseback & passing the day with us, & also of bringing over some of her companions & passing her vacations with us. It is very pleasant to us to gratify her in these reasonable excursions. I merely mention them to let you see the very many ways with which my time is taken up.

We were very much alarmed, Mrs. White, & sorry to hear of your dear mother’s affliction & have affliction & have ever since felt very anxious to hear of her recovery. Do remember me with much respect to both your parents & be particular in your next respecting their health &c. and you — Miss White — do remember me with much affection to your dear mother. Tell her I often think of her & shall always be happy to hear of her welfare, and also to all your brothers & sisters. Your sister Betsey has not yet favoured me with one line from her pen, but I hope & trust that I am still remembered by her & that she still remains my friend.

If Miss D. Johnson is in Ashburnham, do remember me kindly to her. Tell her my last letter still remains unanswered & that I have long, long expected & hoped to receive one from her, & do remember me to all my friends in Ashburnham. It is very gratifying to hear from them all.

I have nothing very interesting to communicate to you relative to the state of religion here. There has been no additions to our church for some time. Our meetings are fully attended but there are not many at this time that take a very lively interest in the all important subject. The people here are now all alive on the subject of railroad — a railroad which is to go from Norwich to Worcester through this village. The last survey was directly through our backyard, within two or three rods [about 40 feet] of our door & that is now supposed will undoubtedly be the most feasible rout. They expect to commence working on the road this month.

The boys send much love to Miss White & would be extremely pleased to see little William Frederick as well as myself. They are now great boys — John eight, and George seven years old. They are in an excellent school. John is now attending to arithmetic, geography, & history; and George to arithmetic & geography. But they are like most children — extremely fond of play.

You my dear friends might justly say to me that I needed further to apologize for not writing a separate letter to each of you, & I acknowledge that a fair exchange would be to give you several letters for one, if we estimate the value of letters by the amount of sensible & interesting matter. Still I can only say in brief that situated as I am among a people unknown to you, it is more than twice as difficult for me to fill out a letter as it is for you ladies with your intellects & among Ashburnham people in whose welfare I take so deep an interest. You see by this I am for saving my own labor so far as I can do it & still not bore the favor of letters in return. You have heard of hitting two birds with one stone & it will occur to you that my present plan has been to practice on that old saying.

And now my dear friends, if you have patience to read to the end of this perusal, I hope you will answer it without delay. I shall ever remain your very affectionate friend, — B. H. P.