The letter is datelined “Brookside” which I believe is the name given to his farm by Thaddeus W. Bacon. The 1860 Census enumerates him, his wife Clara, and 1 year-old daughter Francis Lazette Bacon (1859-1951), in the township of China, St. Clair County, Michigan.

Thaddeus remained the rest of his life in or near Port Huron, St. Clair County, Michigan. Notice of his death was reported in the Kalamazoo Gazette on October 29, 1909. It reads:

ST. CLAIR — Thaddeus W. Bacon, 79, a descendant of Ethan Allen, and one of the best known residents of this county is dead from an attack of apoplexy. He came to St. Clair in 1856. Four children survive.

The only other notice I have of Thaddeus comes from a 1901 article appearing in the 27 February edition of the Saginaw News in which it was announced that the State Tax Commission had won a notable victory against Thaddeus in the Michigan Supreme Court. It seems that Thaddeus held a large number of shares in the New York Central and Hudson River Railroad Company which the Port Huron assessors placed at $50,000 and asked him to pay taxes on. Thaddeus’ lawyer argued that the shares were already taxed in New York State and that to tax him in Michigan for the same stock constituted double jeopardy. Unfortunately, the court ruled against him. 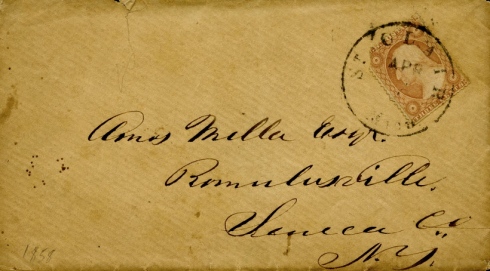 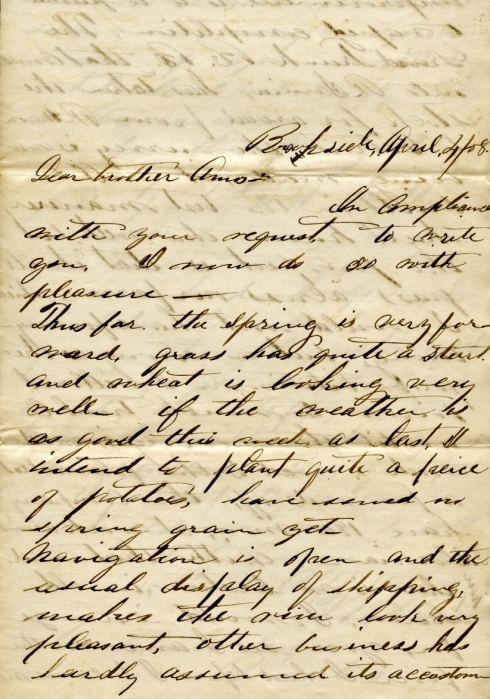 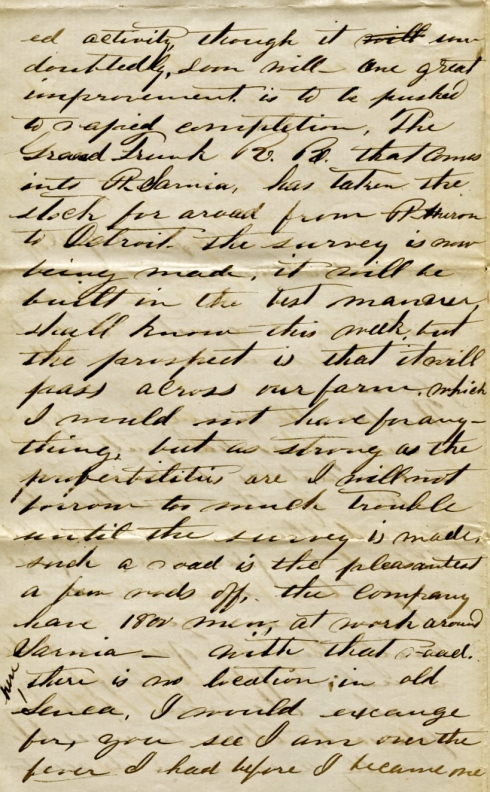 In compliance with your request to write you, I now do so with pleasure. Thus far the spring is very forward, grass has quite a start and wheat is looking very well. If the weather is as good this week, at last I intend to plant quite a piece of potatoes. Have sewed no spring grain yet.

Navigation is open and the usual display of shipping makes the river look very pleasant. Other business has hardly assumed its accustomed activity, though it undoubtedly soon will. One great improvement is to be pushed to rapid completion — The Grand Trunk Rail Road that comes into Port Sarnia has taken the stock for a road from Port Huron to Detroit. The survey is now being made. It will be built in the best manner. Shall know this week but the prospect is that it will pass across our farm, which I would not have for anything but as strong as the probabilities are, I will not borrow too much trouble until the survey is made. Such a road is the pleasantest a few rods off. The company have 1800 men at work around Sarnia with that road. There is no location in old Seneca I would exchange for you see I am over the fever I had before I became one of your son’s in law.

Come Amos, had you better not come and see us this summer. Maybe you would make up your mind to buy while land is but fifty or sixty dollars an acre. Thus far this spring, I have been very long fixing up yards, garden fences, &c., &c.  Brookside now stands in a grove of trees twelve rods by five. The trees are hard and soft maples, oak, ash, elm, hickory, Norway spruce, cherry, dwarf pear, &c. with shrubs, vines, and bushes by lots. They will make a grand show in two or three years. Fact is, they look pretty now.

Write soon. Love to all. And believe me your affectionate brother, — T. W. Bacon

The grave markers of Amos Miller and Emily Graves