This letter was written by 19 year-old Ann Elisa Tallmadge in August 1837 while attending the Cazenovia Seminary in Cazenovia, New York. It was addressed to DeWitt Clinton Vosbury, a student at Wesleyan University, Middletown, Connecticut. The couple would marry two years later on November 28, 1839.

DeWitt Clinton Vosbury was born 20 June 1815 at Windsor, Broome County, New York — a few miles east of Binghamton. He attended Cazenovia Seminary before entering Wesleyan University where he graduated in 1839. Following graduation, he became Principal of Towanda College in Pennsylvania. In 1842, he was a teacher of Natural Science in Ithaca Academy in New York. From 1844 to 1851, he taught in Sheboygan, Wisconsin. Returning to New York State, he taught school in Binghamton for 22 years (1851-1873). In 1873, he became an Insurance and Real Estate Agent in Binghamton. He died there on January 4, 1879 at the age of 63.

Ann Elisa Tallmadge was the daughter of Dr. Joel Tallmadge, M.D., a very early settler of Willseyville (Candor), Tioga County, New York (see footnote below). Elisa was born in August 1818 and attended Cazenovia Seminary in the mid 1830’s, as did her younger sister Laura. She and DeWitt had at least three children who grew to adulthood; Ada, born about 1841; Edward D., born about 1844; and Charles C., born about 1846. 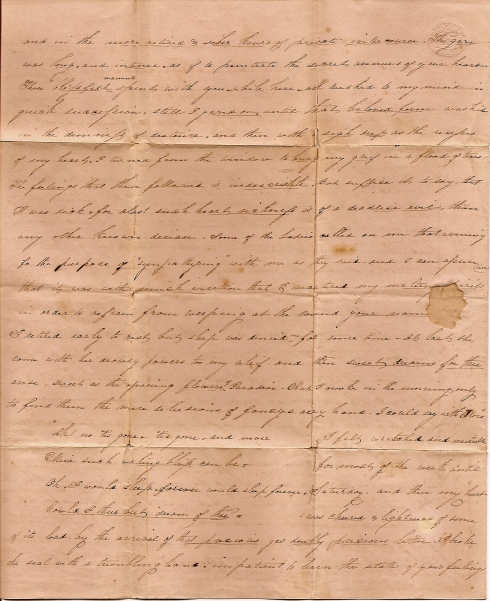 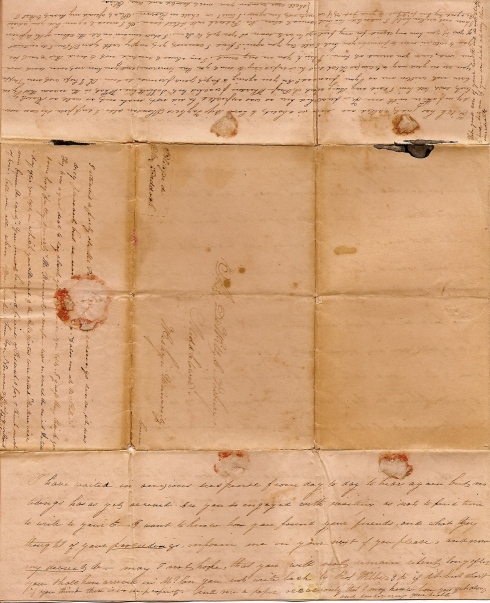 As the dark shades of evening spread their deepening gloom oer the face of nature, my feelings rise in unison with the surrounding scene, and ’tis only when I call to mind those tender friends, whose kindnesses and devout affections have endeared them to my heart, that I am enabled to despel the gloom that the objects around me inspire. And I seat myself alone this evening for the first time since you left me. I am resolved to spend this in writing to you to fulfill the engagement I made when I last saw you. I say alone as it regards company although I have often felt as though I was alone, even in the midst of society. Could you see me some of the time since you left you would think I was very absent minded. Now I will tell you (or endeavour too) how [I] have felt since you left me. But I find that it will [be] quite impossible for me to give you a description of my feelings at parting with you again.

As you gave the last farewell and parting taken, I resolved in my mind not to indulge again in looking at you, but no sooner had the door closed upon you, that like “Lot’s wife” I changed my resolution and retreated to the window too take the last fond lingering look behind on one for whose happiness I would gladly sacrifice my own; one who was dearer to me than all earthly friends, and one with whom I had associated in the busy scenes of life and in the more retired & sober hours of private intercourse. The gaze was long and intense, as if to penetrate the secret avenues of your heart. Those blissful moments spent with you while here all rushed to my mind in quick succession. Still I gazed on until that beloved form was hid in the dimness of distance, and then with a sigh, deep as the recesses of my heart, I turned from the window to bury my grief in a flood of tears. The feelings that then followed is indescribable. But, suffice it to say, that I was sick, for alas! such heart sickness is of a deadlier evil than any other known disease. Some of the Ladies called on me that evening for the purpose of “sympathizing” with me as they said, and I can assure you that it was with much exertion that I mastered my insulting spirits in order to refrain from weeping at the sound of your name.

I retired early to rest but sleep was denied for some time. At last she came with her drosy powers too my relief, and then sweet dreams for thee arose, sweet as the opening flowers of Paradise. Oh! But I awoke in the morning only to find them the mere delusions of fancy’s very hand. I could say with “Flora”

I felt wretched and miserable for most of the week until Saturday, and then my heart was cheered & lightened of some of its load, by the arrival of that precious, yes doubly precious, letter. I broke the seal with a trembling hand, impatient to learn the state of your feelings and from your description, I should think they were some such as I had endured. Your sentiments advanced corresponded with my feelings when you said, “that it was a miserable condition too be in love, especially when we are compeled thus by “cruel fate” to be separated, so long from each other. But I will endeavour by the grace of God to endure it, looking forward to the end of a few years, hoping then to enjoy your society without the thoughts of being again separated. My heart seems ready to sink within me, as [I] realize the many changes that may take place before that time shall have arrived. It is quite probable that one, or both of us, may fall victims to the death ‘ere that anticipated [day] may roll round, but be that as it may, let us hope for the better, trusting all in the hands of Him who hath promised never to leave, nor forsake us so long as we put our trust in him.

I suppose you are now about to leave your family circle and friend, to return again to Middletown, and with their fervent prayers shall mingle the feeble ones of your Elisa, for the preservation of your life and health, and for your prosperity and happiness. I shall regard you with different feelings from what I have done before (as you gave me the privilege) and to feel that my affections for you are increasing every day. My love is pure, unsullied by jealousy. I have the most perfect confidence that no other person can gain your affections so long as you know my feelings toward you. But the time has come that I must dismiss this pleasing subject. I find that I am reaching the bounds of my sheet, and perhaps you will be heartily glad I have written just as you told me to write, “not to be particular, and to tell you just how I felt.” This I have endeavoured to do, but how I have succeeded, I cannot tell. I hope my blunders will all be pardoned as I have not had a moments time to think only as I wrote alone. I thought I would not trouble you with so long a one again but I shall have to fill the ends, I guess, as I have not told all yet.

I attended a party at Mr. Pe______ a few evening since. It was very pleasant, but we ______. & also one at McBealer’s. They have a great deal to say about you ever since you left. I guess they think you some boy “pretty smart.” Mr. Bennet’s con___ was answered the next Saturday after you left in which you & the rest of the Collegiates were called “the three wise men from the east.” You must be a good friend of Paddock’s for to think so much of him. Tell me all when you write. How [Daniel Cummings] Van Norman gets along without Miss [Sarah Maria] Spencer.

I have waited in anxious suspense from day to day to hear again but no tidings has as yet arrived. Are you so engaged with visiting as not to find time to write to your Elisa. I want to know how you found your friends and what they thought of your proceedings. Inform me in your next [letter], if you please. And now, my dearest V., may I not hope that you will not remain silent long after you shall have arrived in Middletown? Can you not write back by Prof. [Perlee B.] Wilber? Don’t do it if you think there is impropriety. Send me a paper occasionally that I may know how you get along and concerning your health.

Fitch has just called on me. [He] is about to have Miss Taylor’s hand also. I suppose she can now sympathize with me. F. preached here as was expected. He did not make out as well as [Rev. Bostwick] Hawley but don’t tell him I said anything about it. Professor Whardon preached last Sabbath here.

What is the reason that you have not written me as you promised? Are you going to forget your promise so soon? Oh, I hope not now. I suppose you are on your way to Utica (as Fitch says he is expecting to meet you there tomorrow) and you have not even sent me one word since you arrived at home. I think you are very cruel. I am almost resolved not to send this and wait for you to write in order to punish you, but I shall try you again. I find I cannot get angry with you. Now I do [plead with] you, if you hve any regard for my feelings, too write soon as you get to Middletown. I shall remain until the close of the sessions.

I have not written half [what] I wanted too but I must close. Mr. [William Hemans] Paddock will start soon. So I must again bid you adieu. Be a good boy. Live faithful to your God & if we meet not here again, I trust we shall in Heaven. Rest assured, my dearest, that I shall ever remain, your most devoted and true, — Elisa

[P.S.] Ma and Pa visited here the week you left and was sorry you did not remain longer. They would have been happy to have seen you. They took my sister home so you see that I am alone now & lonely. Take good care of your health and do not study too hard. Let me [know] if you are sick at any time immediately.