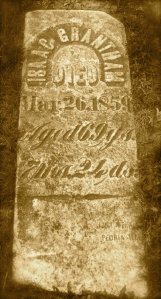 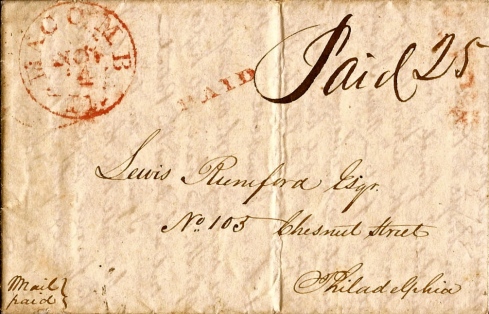 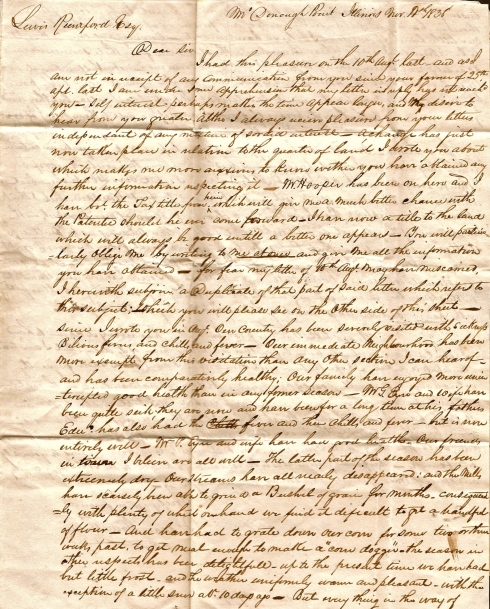 I had this pleasure on the 10th August last and as I am not in receipt of any communication from you since your favor of 25th April last, I am under some apprehension that my letter in reply has not reached you. Self interest perhaps makes the time appear larger, and my desire to hear from you greater, altho I always receive pleasure from your letters independent of any mixture of sordid interest. A change has just now taken place in relation to the quarter of land I wrote you about which makes me now anxious to know whether you have obtained any further information respecting it. Mr. Hooper has been on here and I have bot the tax title from him, which will give me a much better chance with the patentee should he ever come forward. I have now a title to the land, which will always be good until a better one appears. You will particularly oblige me by writing to me at once and give me all the information you have obtained – for fear my letter of 10th August may have miscarried. I herewith subjoin a duplicate of that part of said letter, which refers to this subject, which you will please see on the other side of this sheet. Since I wrote you in August, our country has been severely visited with sickness – Bilious fevers, and chills, and fever. Our immediate neighborhood has been more exempt from this visitation than any other section I can hear of, and has been comparatively healthy. Our family have enjoyed more uninterrupted good health than in any former season. Mr. G. Eyre and wife have been quite sick. They are now and have been for a long time at his father’s. Ed__ has also ad the fever and then chills and fever – but is now entirely well. Mr. P. Eyre and wife have had good health. Our friends in town, I believe, are all well. The latter part of the season has been extremely dry. Our streams have all nearly disappeared and the mills have scarcely been able to grind a bushel of grain for months. Consequently with plenty of wheat on hand, we find it difficult to get a handful of flour and have had to grate down our corn for some two or three weeks past to get meal enough to make a “corn dogger.” The season in other respects has been delightful. Up to the present time, we have had but little frost, and the weather uniformly warm and pleasant – with the exception of a little snow about 10 days ago.

But everything in the way of business is completely prostrated. We have had in this respect truly a trying time. There is hardly a dollar in the hands of any person except the merchants – even our little land speculators, I believe, have run out. Our crops of corn is thought to be abundant every where throughout the state, but from that course we can scarcely realize any thing till next Spring or Summer. Notwithstanding, it is much wanted at the South and East and sought after at very high prices by orders to our merchants and it is believed by deposits of cash also. But they would grind us down to the lowest prices of former years (if we sell to them now) although they are fully aware that they will get for it from 3 to four fold the price of other seasons. Our banks have afforded no relief and it is quite uncertain when they will. I expect to commence husking my corn this week. My crop, I think, will turnout about 1500 bushels. I have I expect over 400 bushels wheat which is nearly all in stack yet. It obtains 87 ½ cents at Warsaw, but I think it will raise to $1.00 per bushel. This is a gloomy picture of our prospects in the West and if they do not soon brighten, it will oblige many of us to “pull up stakes.” Accounts say that Pennsylvania has suffered much for the severe drought.

You are doubtless aware of the President’s Proclamation ordering some fractional townships in our state, and a portion of Iowa Territory into market in this month, In consequence of which we see lately a good many travelers passing with heavy saddle bags “wending their way” to Quincy or Burlington.

Please tell William his promised letter has not yet come to hand. I would have written to him before this reminding him of its delay, but I am to much pressed. I hope the time will come when I can more frequently interchange a friendly correspondence with my old acquaintances in the East. I wish to convey through you my warm regards and best wishes to William and all that family. And will cherish the hope that they all enjoy the blessing of good health and that their exertions in their several avocations are rewarded with success. The family join me in our best respects and good wishes to yourself and family. They wish also to be remembered kindly to the Harding family and others of our friends who may enquire after us. Truly your friend, — Isaac Grantham

Dear sir. Your esteemed favour of 25th April last came duly to hand and I am greatly obliged for your exertions touching the quarter of land. I have been fishing about as well as I could since you left us and have at length learned that Mr. Hooper (the person named in my letter) is not the Patentee. He purchase a Tax Title some time ago for taxes of 1821 & 1822 which I presume is all the title he holds, unless he may at some subsequent period have bought the Patent also, which I think is not likely. I am advised that he formerly lived in Ontario County, N.Y. but the writer did not know whether he is now living or not. I have written to N. Y. to ascertain the fact. Now I want you, if there are any of your acquaintance in whom you have entire confidence going to Washington City, to get him to call at the general land office and get the name of the Patentee (the Old Soldier) and if it can be had, his residence &c &c. as there is no person her knows anything of the owner of the Patent. I am in some better spirits and have yet hopes of getting [the land] if I could only find out who owns the Patent.

I fear I am taxing your friendship too far in this matter but will hope that at some time I shall be able to reciprocate the former. Any charges that may be incurred at the Patent Office, I will pay through Mr. Horvath or in any other way you may point out. I am inclined to think the owner of the Patent is dead and I have partly concluded to take possession and hold on until the owner comes forward.

Please consider the above strictly confidential.

The quarter you will recollect is the S.E. of Section 14 in Township 6 North, in Range 3 West of the Fourth Principal Meridian.