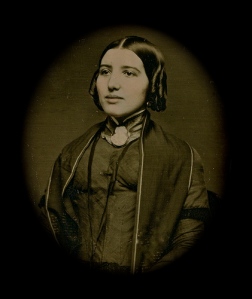 I have so little time to write to you by [my sister] Emma, that I must expect that you will not be entirely satisfied with this, my present. Em is going to visit at Ellen K’s & it will be necessary for them to consider her health somewhat, as she is still very week — it may be considered a positive thing that she will not improve in this dismal city of ours.

Your request relative to Clara’s last illness I cannot entirely satisfy. You know that we always have such an unsatisfied, restless, longing to hear particulars, that we imagine must have occurred that the reality hardly suffices for the story. Clara was playfully delirious a good deal of the time. Then, and sometimes in her lucid moments, she was watching for my return, as they told me. She was worried that she was giving trouble, regretted the attendance of a physician on account, I suppose, of the expense, and in this way fretted somewhat that the house was neglected through her unfortunate illness. “Oh! poortith, cauld & restless love!” How many hearts ye have mangled! My feeling is one of regret that my dear, dear sister could not have been spared longer to have found some realization of happiness in this vexatious world of ours.

I met with some losses in the early part of the season, which with the load of anxious cares at home, made it apparent to Clara that I had more trouble than her kind heart could contemplate without sympathy. But this month of August brought prosperous returns & I have just made a thousand dollars, which were beginning to flow in when she was taken sick, and the remark may be singular, but characteristic when I say that I was anticipating her having a “jolly time” spending her part of it. Why couldn’t she be spared? is a query that I have groaned to myself many times. Those who believe in a “kind Providence” and guilty of a blasphemous creed, when they see such things overcome us as a “summer cloud” & wonder not at their mean ridiculous of faith in an allwise government in the moral world.

I had the satisfaction of a “long talk” as she used to call it, with our dear girl the evening that I went away, and I confess to a superstitious feeling of certainty that she would get well, in case that I went away, that proving to have been the event in Em’s case, and we both remarked it, as I took leave of her. I shall have some daguerreotypes taken for her friends. I can’t bear to look on the one we have for an original; her dear, kind face looks upon me with such a melancholy, mourning expression that it almost unmans me. My remembrance of her has pity for one of its ingredients. Pitiful! Wondrous pitiful that her life had been so full of sorrow, & stormy trial, and I had so little time or proper opportunity to build up for her that “Haven of Rest” elsewhere. You know that she had such a sweet gaze from her eyes that were so beautiful a feature with her & so full of intellect too — all mind — nothing of the earth, earthly, but I can’t write any more.

Your companion in sorrow, — Thomas

P. S. I will bring you some of her hair & some little keepsakes, perhaps, for friends, but in selfishness of grief can find nothing now to part with. — Thomas

From a poem by Robert Burns:

O poortith cauld, and restless love,
Ye wrack my peace between ye;
Yet poortith a` I could forgive,
An `twere na for my Jeanie.