The letter was written to Capt. Henry S. Stark who sailed ships for Maxson, Fish & Co. Stark and his wife, Mary Rathbun, lived on West Mystic Avenue in Mystic.Mary supervised the construction because her husband was in command of a bark voyaging to Italy during its construction. The avenue was called Skipper Lane because many ship captains built homes there. Capt. Stark also made voyages to Mexico and Hawaii. His wife accompanied him on his voyage to Honolulu from 1854 to 1856 on the clipper ship B. F. Hoxie. 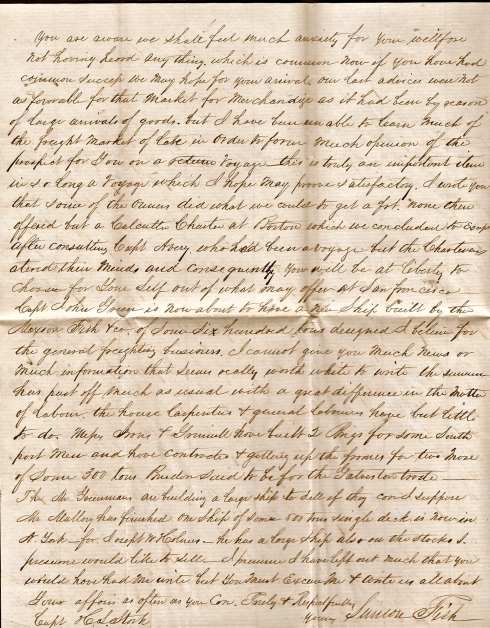 Dear Sir, I wrote you by the last mail and hope you have received all letters sent you but as some uncertainty exists, I write again as nothing has yet been heard of you since the Pilot left you off the Capes. In the first place, I have to say it has been and continues to be very healthy among us. All our friends are in a good degree of health except Norfolk & Ports north. In Virginia, epidemics have been less violent than usual thus far this season.

Until the first of this month, freighting has been quite low and still both for Europe and domestic commerce. Since then, there seems to be an activity which denotes very favorably first at New York & to the South. Today New Orleans is quoted at 15/16 penny and we hear of 2 cents for cotton has been given for Genoa and 1 ¼ cents for Haver. & the papers begin to latte of absence of tonnage in N. York as if the great crops of this year are about to act favorably for commerce.

I wrote you that the Schooner Elizabeth was burnt by lightning at St. Marks 31st of July, killed the [First] Mate, and proved a total loss. Capt. Williams is now at home. The Samson is at St. Marks & is now trim. The Remington was there. The W. H. Brodie has been repaired, her sides being some rotten which put her back, but today goes through the Sound. The new Brig for Capt. Benjamin Brawes, Jr. was launch[ed] yesterday at the Old field. We have had verry dry and warm weather for some weeks past but today is cool wind N. East.

The Ocello takes the place of the Wm. H. Brodie in Sturges & Clearman’s Mobile line, has but just got on to the birth. The Asa Sawyer took a Charter at Hamburg to go to Mellbourne & then to China & back. Expect she will be gone about a year.

You are aware we shall feel much anxiety for your wellfare, not having heard anything, which is common. Now, if you have had common success, we may hope for your arrival. Our last advices were not as favorable for that market for mechandize as it had been by reason of large arrivals of goods. But I have been unable to learn much of the freight market of late in order to form much opinion of the prospect for you on a return voyage. This is truly an important item in so long a voyage, which I hope may prove satisfactory.

I wrote you that some of the owners did what we could to get a freight. None then offered but a Calcutta Charter at Boston, which we concluded to except after consulting Capt. Avery who had been a voyage, but the Charterers [changed] their minds and consequently, you will be at liberty to choose for yourself out of what may offer at San Francisco.

Capt. John Green is now about to have a new ship built by the Maxson, Fish & Co. of some six hundred tons designed, I believe, for the general freighting business. I cannot give you much news for much information that seems really worthwhile to write. The summer has past off much as usual with a great difference in the matter of labour. The house carpenters & general labourers have but little to do.

Messrs Irons & Grinnell have built 2 Brigs [Belle Hoxie & Andrew Jackson] for some South port Mess and have contracted & getting up the frames for two more of some 300 tons. Brisdon said to be for the Galveston trade. The Mr. Greenmans are building a large ship [Leah] to sell if they can. I suppose Mr. [Charles] Mallory has finished — one ship of some 500 tons single deck is now in N. York – for Joseph W. Holmes. He has a large ship also on the stocks I presume would like to sell. I presume I have left out much that you would have had me write but you must excuse me & write us all about your affairs as often as you can.

Click here for web page showing picture of Capt. Stark and his wife.

Click here for information on the bark W. H. Brodie.

Click here for information on the bark Asa Sawyer.