This letter was written by Carl Christian Schurz (1829–1906), a German revolutionary, American statesman and reformer, and Union Army General in the American Civil War. He was also an accomplished journalist, newspaper editor and orator, who in 1869 became the first German-born American elected to the United States Senate. His wife, Margarethe Schurz, was instrumental in establishing the kindergarten system in the United States. During his later years, Schurz was perhaps the most prominent independent in American politics, noted for his high principles, his avoidance of political partisanship, and his moral conscience.

In 1855, Schurz settled in Watertown, Wisconsin, where he immediately became immersed in the anti-slavery movement and in politics, joining the Republican Party. In 1857, he was an unsuccessful Republican candidate for lieutenant-governor. In the Illinois campaign of the next year between Abraham Lincoln and Stephen A. Douglas, he took part as a speaker on behalf of Lincoln—mostly in German—which raised Lincoln’s popularity among German-American voters (though it should be remembered that Senators were not directly elected in 1858, the election being decided by the Illinois General Assembly). Later, in 1858, he was admitted to the Wisconsin bar and began to practice law in Milwaukee. In the state campaign of 1859, he made a speech attacking the Fugitive Slave Law, arguing for states’ rights. In Faneuil Hall, Boston, on April 18, 1859,[8] he delivered an oration on “True Americanism,” which, coming from an alien, was intended to clear the Republican party of the charge of “nativism”. Wisconsin Germans unsuccessfully urged his nomination for governor in 1859. In the 1860 Republican National Convention, Schurz was spokesman of the delegation from Wisconsin, which voted for William H. Seward; despite this, Schurz was on the committee which brought Lincoln the news of his nomination.

In spite of Seward’s objection, grounded on Schurz’s European record as a revolutionary, Lincoln sent him in 1861 as ambassador to Spain. He succeeded in quietly dissuading Spain from supporting the South. Persuading Lincoln to grant him a commission in the Union army, Schurz was commissioned brigadier general of Union volunteers in April, and in June took command of a division, first under John C. Frémont, and then in Franz Sigel’s corps, with which he took part in the Second Battle of Bull Run. He was promoted major general of volunteers on March 14 and was a division commander in the XI Corps at the Battle of Chancellorsville, under General Oliver O. Howard, with whom he later had a bitter controversy over the strategy employed at that battle, resulting in their defeat by Thomas J. “Stonewall” Jackson. 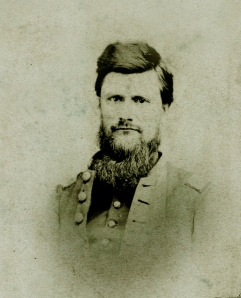 Schurz was at Gettysburg commanding the Third Division of Howard’s XI Corps, and at Chattanooga (also a victory for the Union side), at which he served with the future Senator Joseph B. Foraker, John Patterson Rea, and Luther Morris Buchwalter, brother to Morris Lyon Buchwalter. Senator Charles Sumner (R-MA) was a Congressional observer during the campaign. Later, he was put in command of a Corps of Instruction at Nashville. He briefly returned to active service, where in the last months of the war when he was with Sherman’s army in North Carolina as chief of staff of Henry Slocum’s Army of Georgia. He resigned from the army when the war ended. [Source: Wikipedia]

The letter was written to James Harvey Greene (1833-1890), who moved to Prairie du Chien, Wisconsin, prior to the Civil War where he was the editor of the Prairie Du Chien Leader newspaper. During the Civil War, Greene served as Captain of Co. F in the 8th Wisconsin Infantry.

It would give me the greatest pleasure to address the people of Prairie du Chien, but I have just received a telegram from the governor requesting me to fill some of his appointments with Hobart. As it seems to be a matter of some importance that I should do so, I shall hardly have time to visit P. du Chien before election.

The “Hobart” referred to in the letter is probably Harrison C. Hobart who was a prominent pre-Civil War member of the Wisconsin legislature and an officer during the Civil War who was captured and later organized a tunnel escape from Libby Prison in Richmond.