Boarding a Packet on the Erie Canal

This interesting letter was transcribed directly from the internet where I found it offered for sale in October 2011. It was written by 27 year-old Isaac Farwell Holton (1812-1874), the son of William Holton (1771-1857) and Olive Rockwood (1772-1836). Holton graduated from Amherst College in 1836. Three years later, when this letter was written, he had just graduated from the Union Theological Seminary in New York City and was about to begin employment with the Home Missionary Society in Michigan and Illinois. (See footnotes for Holton’s biography.)

Near the end of the letter, Holton says that he has sold a bookcase, table, and cloth belonging to Farwell suggesting that not only were the two attending the Union Theological Seminary together, they were undoubtedly rooming together in New York City as well.

Directed to E.S.G. but written to J.E.F. Contains nothing confidential.

I have not been able to address a line to you from New York, nor since, until this afternoon. I am now near the termination of the Erie Canal. It is Saturday. I left New York [City] a week last Wednesday evening and now I know not whether to go back & inform you historically of all that has passed or launch you at once in [my present situation]. When I look back to the eventful period that has elapsed, I shrink from the task of going through it again. We parted at Fitchburg [Massachusetts]. The rest of that day was as long as it was desolate. I took an early start for Boston the next morning. The first part of my road was shrouded in darkness. I took the wrong road & when the cock was crowing, I was near Groton. It was a beautiful morning. I had determined to walk the whole distance & therefore refused a cordial offer of a ride.

I arrived in Concord at half past 10. As I approached the place, I recollected that Miss Edwards left A. just before the arrival of a letter for her which it was that might contain news of sickness at home. I called to inquire supposing that I should write at Boston. I thot the call would delay me 4 minutes. I staid 4 hours. I did not even expect to see the family. But not content with treating me [cordially], he served wine & music (Amelia is no contemptible player at the piano). They proceeded to dig up their flower beds for bulbs of lilly, gladiolas, &c. I left there almost oppressed with a sense of kindness alike unexpected & undeserved.

It was near 3 when I resumed my walk. I remembered that I walked in the steps of predecessors whose steps were quickened by the music of rifles & whistling balls – sounds as ungrateful to them as ever music is to those who are not in humor for it. They had been sent to destroy powder & lead; they endured the combustion of the former & went back to Boston [with] many specimens of the latter more securely concealed about their persons than misers are [protective of] their gold.

Of my stay in Boston, I need say little. Sabbath I spent at Uncle Welles.’ I visited Cambridge & became acquainted with some of the _____lists there. Went to the Conservatory of Plants in _____. It will in five years if under good management be [successful].

Niagara Falls, from top of the ladder on the American Side, 1839 (Bartlett)

As I trust myself to the treacherous bosom of Erie tomorrow, I will try to mail my letter before I start. The passage is dangerous & I may not again reach the shore. I am even now drenched with the spray of Niagara…The falls cannot be seen from the American side. Just enough water runs this side Goat Island to prevent wading to it in dry weather. I went almost under the sheet of falling water on the Canada side & was rewarded with such a drenching as I had not had but once in 5 years. The precipice is high, 1/2 as high as the Palisades and the sheet falls out far from it. If it extended as far clear across, our Yankees would build a carriage road under it & indeed that may some day be done, tho I doubt it. The roar is not very loud, tho it sounds quite plain tonight [at a distance of] 22 miles. I should not expect to hear it so plain five miles.

To return [to my story], I visited the Missionary Rooms [of the American Home Missionary Society] at Boston & left in writing my testimonials of Elizabeth. Of your probable destination, I could learn but little. It may be South Africa. Did not you, Elizabeth, dread it so much I should hope it would. Dingaan, the [Zulu] Ruler tyrant is now humbled. He has been almost the only obstacle.

Saw Elizabeth Mills at South Boston — assistant pupil in a flourishing school. On my return to New York [City], found brother Hall [note: possibly John Goodman Hall?] had been there to see me. He is now teaching district school near Morristown [New Jersey]. I arrived Wednesday.

Started next morn for Morris [New Jersey]. Called at Mr. Valseys in Robinson at to see if they wished to send. Joanna Day was there. She had been South teaching. I had almost forgotten her. Hall was much improved. Some things I could wish different. Saturday he cleaned my watch. Sabbath heard two excellent sermons from [Rev. Benjamin] Schneider at Whippany [New Jersey]. [Benjamin Gilbert] Riley is married. Monday returned to New York [City]. [Found] Mrs. Merriam surprisingly well. Left next week Wednesday evening. Took French leave of most of my friends. Did so in fact at Dr. [John] Torrey’s. Staid there one night. Seminary very full…

On Lake Erie a man is not sure of his dinner after he has eaten it. My own preparations consist simply of 26 cents worth of cakes & apples. Our room is more comfortable than my quarters will be on land, bedding excepted. Our apartment is over the main deck but lighted only by a skylight. We have quite a decent company.

So I return [to my story]. I Left New York on Wednesday evening to [go to] Albany. In a.m., took my last walk east of the Hudson. The raw air drew tears from my eyes as I looked from the very high plain east of me. It was one of the noblest prospects I ever saw.

Visited the Troy [Female] Seminary. Saw there Mrs. Yates, alias [Emma] Willard, [who goes by] the latter name, acting as she said in capacity of advisor general. It is an immense boarding & day school.

Left at 8 in the evening in [a canal boat named,] The Wyandot (5 day line). Eight days of imprisonment succeeded. Saturday night we rode till daybreak when with morning light our captain’s conscience returned & he stopped 1 1/2 miles from any church. No persuasions would move him [to proceed] so near that our lame men & females could attend church. 3 of us walked to Fultonville Church. [Traveled a] half day only. The bedding was insufficient [and we] had to keep a fire all night. The cabin was well filled. My living was generally bread & milk or indeed anything I chose. This was very pleasant. Around at Rochester, The Wyandot stopped. They proposed putting me on a Sabbath breaking boat on Friday evening telling me we should arrive in Buffalo on Saturday night. I would not believe them. They then threw themselves on my mercy. I let them off by paying me 1.12 extra for Sabbath expenses. The boat left me at Lockport & [travelled on without me where it] arrived in Buffalo Sabbath noon. [It then] left the same day having the passengers to seek lodgings on the Sabbath.

I introduced myself to Rev. Mr. [William Carpenter] Wisner at the close of a meeting [at the 2nd Presbyterian Church in Lockport, and was] invited to spend the Sabbath with him. I declined. Staid with one of his elders – was begged away from him Sabbath P.M. & afterward begged back again. I had a pleasant & profitable Sabbath. Mr. Wisner took tea with me. His wife [Jane] is absent or he said he should not have permitted me to decline his invitation.

Monday, [I left Lockport and] took the cars at 9 for Niagara. Met [Rev. Gilbert] Rockwood at the stopping place 7 miles from the falls. Went home with him [to the] Tuscarora Mission. They progress very slowly with the language. The Indians [have] never heard a sermon except through interpreter. Rockwood’s family [consists of a] wife [Avis Hooper], babe [Sarah], & a teacher.

I have now in a manner brot my history up to this moment. Should I live to reach Michigan, I expect to spend the winter as shop agent for the Evangelist. My eyes are a little improved not much. On the canal my life was nearly as lazy as Dr. Rogers would wish. Yesterday, I wrote my will [and] left it with Rockwood. Today, I take myself on the lake with calm reliance on God. The prospect of the weather at this moment is more favorable than it has been for some days. Still I am not in a frame of mind for writing. In either event, I have seen you I fear for the last time. In the whole, my visit to New England was the most pleasant period of my life…

But I must close. When I reach Detroit, I will mail a letter giving my address. Write but do not pay the postage. I have tried to make my a’s different from my o’s, but you see I cannot. My letter of necessity is dull having had every thing so distract me [while writing] every line. I hope you have received your medical books ere this. Your French books & Christianity are at Mr. Merriam’s. I sold your bookcase, table, & cloth for $4 subject to your veto. I thought I should make some part of this letter interesting to Mr. Gates’ family but I have not succeeded so I must content myself with sending my respects to them individually, Mr. & Mrs. Gates, Elizabeth & Mary. Would that I could emphasize each of these names.

From the Amherst College Biographical Record, Class of 1836:

A more comprehensive biography of Isaac Farwell Holton appears in a family history: 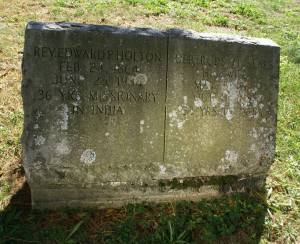 Gravestone of Rev. Edward Payson Holton (a son of Isaac F. Holton) who served as a Missionary in India for 36 years.

Steamboat “Michigan” — Built 1833 in Detroit. Sailed Between Buffalo and Detroit.

One response to “1839: Isaac Farwell Holton to Elizabeth Sophia Gates”