This letter was written by John Drake (1805-1838) who came to Michigan from New York about 1830 where he married Phoebe H. Sill in January 1831. He started a store in the village of Unadilla, was elected the first town supervisor and became a member of the First Presbyterian Church there. He died in the spring of 1838.

The letter was forwarded twice, once to Ira’s brother, James R. Albro, who lived in Lodi, Cattaraugus County, New York. 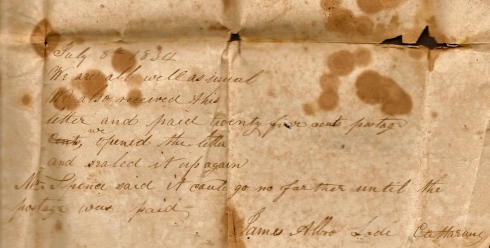 Yours of the 22nd was received on the 29th and it afforded me much pleasure to hear from you and that you were well with the remainder of my friends at Springville.

Your request for a discription of the county I cheerfully comply with and will endeavor to give as correct a one as is in my power, first, you will be anxious to know about a school. There always has been a good chance here for getting schools and the price has generally been about twelve dollars per month, and I think there will be no difficulty if you come in season of getting one at that price for fur or five months. And if you will engage to come, will try to get the school in the District where I am which is a very good one.

With regard to the country, I think there is no better for a young man that is enterprising. Labour demands a good price for any kind of business. The land is good and verry productive – especially for wheat and all kinds of grain grow as well as most other counties. And, in fact, I have never seen better altho’ there probably is. It is but little work to clear the plains ready for plowing. Where that is done, it takes three yoke of oxen to plow it the first time. Then it will produce good wheat the first crop. After that, it is fit for any kind of grain.

As for the health of the country, it is allowed by people that have been in new countries that it is as healthy as any they ever was in. The diseases are not verry malignant. It is mostly Ague & Fever, which is not considered a verry dangerous complaint. After knowing what I do of the country, it would not prevent me from coming one moment. Although I have had a great deal of sickness, I cannot say the country is verry unhealthy for there are others that have been her longer than I that have hardly been sick attall – some more & some less.

The Society here is verry good. We have all kinds of denominations here – Methodists, Presbyterians, Baptist, Episcopal and Christians – all good people. Temperance Society’s flourish very well in Michigan. In fact, I know of nothing that can be considered a real obsical in the way to prevent any young man from coming to Michigan but rather to encourage.

Myself and family’s health is verry good at present. I should be extremely glad to have you come to Michigan. You can have a home at my house as long as you please. If I have omitted any thing that you would be glad to hear about, pleas let me know. Give my love to your father & mother and family and all enquiring friends.

You will please write as soon as convenient and let me know what time you will be here. Yours with respect, — John Drake

We are all well as usual. We also received this letter and paid twenty-five cents postage. We opened the letter and sealed it up again. Mr. Spencer said it could go no farther until the postage was paid. – James Albro, Lodi, Cattaraugus Co., New York