From this 1852 letter, it’s pretty clear that William is ready to give the ghost as far as trying to earn a living in Arkansas. Family history records show that he eventually moved on to Texas, got married (in 1870), and died in Lamar, Texas in 1907. 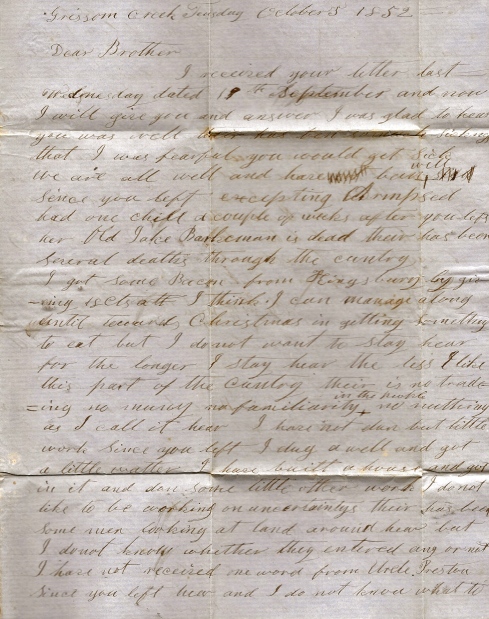 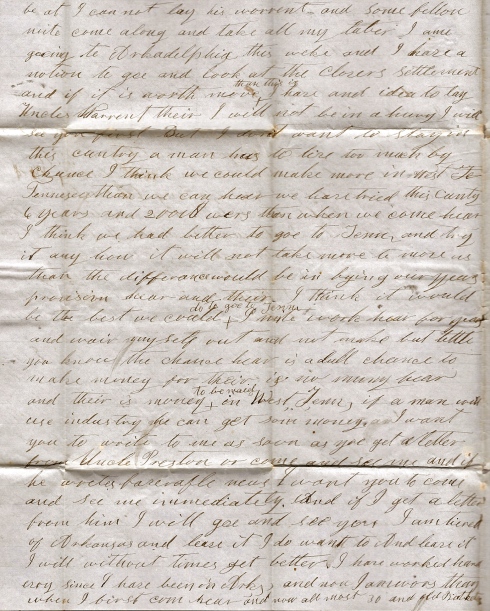 I received your letter last Wednesday dated 19th September and now I will give you an answer. I was glad to hear you was well. There has been so much sickness that I was fearful you would get sick. We are all well and have been well since you left, excepting Armpsed (?) had one child a couple of weeks after you left. Her Old Jake Barkeman is dead. There has been several deaths through the cuntry.

I got some bacon from Kingsbury by giving 18 cts. I think I can manage along until toward Christmas in getting something to eat but I do not want to stay here for the longer I stay here the less I like this part of the cuntry. There is no tradeing, no murcy, no familiarity in the people, no nothing as I call it here. I have not dun but little work since you left. I dug a well and got a little watter. I have built a house and gt in it and dun some little other work. I do not like to be working on uncertaintys. There has been some men looking at land around here but I do not know whether they entered any or not. I have not received one word from Uncle Preston since you left here and I do not know what to be at. I can not lay his warrant and some fellow might come along and take all my laber. I am goeing to Arkadelphia this weke and I have a notion to go and look at the Closer’s Settlement, and if it is worth more than this is, I have and idea to lay Uncles Warrant their. I will not be in a hury. I will see you first but I don’t want to stay in this cuntry. A man has to live too much by chance. I think we could make more in West Tennessee than we can hear. We have tried this cuntry 6 years and 2000$ wers than when we come hear. I think we had better to go to Tenn. and try it. Any how it will not take more to move us than the difference would be in bying our years provision hear and their. I think it would be the best we could do to goe to Tenn. I mite work hear for years and wair myself out and not make but litte. You know the chance hear is a dull chance to make money for there is no mony hear and there is money to be maid in West Tenn. If a man will use industry, he can get some money. I want you to write to me as soon as you get a letter from Uncle Preston or come and see me and if he writes favorable news, I want you to come and see me immediately. And if I get a letter from him, I will goe and see you. I am tiered of Arkansas and leave it I do want to. And leave it I will without times get better. I have worked hard evry since I have been in Arkansas and now I am wors than when I first come hear and now all most 30 and old Batcheler.

I received a letter dated August 19 from Sister Catharine. She does not write any thing of importance, only she said that Jane had profest religion. I will mail her letter to you and you can see it and what she has wrote. I have but little more to write but if I had time to write, I could write for a whole day. Went and tried wood ____ for money and he would not talk like paying any time shortly. I will goe and see him again and if he do not pay, I will seu him.

I want you to write as soon as you get this for I am anctious for to hear from you and I want you to spend your opinion freely to me what would be the best to doe for you know this cuntry is a hard cuntry as well as I do. I have not bought corn yet. I can get plenty at 30 cts per bushel.  I will not buy until I know whether we’ll stay here or not. Nothing more. I remain your brother, — Wm P. Snell