This letter was offered for sale on the internet in July 2011. I transcribed it directly from the scanned images. 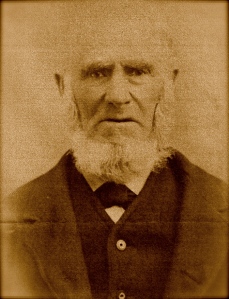 The letter was written by John Waterman Briggs (1802-1891), a son of David Briggs (1776-1857) and Anna Chambers (1779-1869). The author was writing from his home in Milo Center, Yates County, New York, to his brother, Joseph Briggs who had settled in Belvidere, Illinois. Another brother, Thomas Briggs (1810-1857) is mentioned as residing on property in Michigan, probably near Schoolcraft in Kalamazoo County where he died. George B. Briggs, another brother, is mentioned as residing in Milo and having already decided to stay there.

This letter suggests that John Briggs intended to migrate west to Illinois like his brother Joseph. Perhaps the Panic of 1837 derailed his plans as he remained in New York State, living most of his life in Naples, Ontario County.

Family genealogy records on the internet do now show a Joseph Briggs in this family but I’m certain that Joseph was a brother of John Briggs. John and his wife Ann Green raised at least ten children, one of who was named Joseph C. Briggs, born 1836 — the year before this letter was written.

I received your letter on Thursday last after having anxiously expecting one some time, and was surprised to find that you had not received my letter, which I wrote immediately on the receiving of your first letter.

We are all in very good health and right in the midst of our harvest which is uncommon late this season, it being now the ____day and we are now more than half done cutting. Our wheat is very badly shrunk and had it not been for that we should have had a fair crop.

Father got home from Michigan after an absence of 10 weeks, leaving Thomas in Michigan to do the farming. Since then, we have not heard from there but expect a letter soon. We have not made much preparation for starting yet and cannot until after harvest sooner or later.

S.B. [Samuel Botsford] Buckley has got home from his wanderings. He came last Monday and he left S. Keys in Illinois at Pekin near Peoria. Botsford likes Illinois take it throughout better than any of the western states but whether he likes it well enough to go there to live yet I do not know.

Had I received your letter a month or so earlier I should before this have been there this time far on my way to Illinois but as our folks will not start short of 4 or 5 weeks which will bring it about the middle of October and it will take us at 10 days to go into Michigan where I shall want to stop a few days. I shall not out to Illinois until the last of October or the first of November but somewhere about that time. Unless Providence should order otherwise, you may expect me there and as to the money you speak of, I will try to get there without it and I want you to lay some in securing a claim for me as I cannot get this fall time enough to do it myself and as Congress meets in September, therefore, the sooner these claims are made the better.

I presume you value the claims as high as they will warrant if such a law should pass and it is best to be prepared. You upper diggings, if I read it right, have dissolved partnership. You say you got a wood claim worth 300 dollars besides a claim you sold for 100 dollars? But as for your village lots I guess you will have to wait sometime before they bring a great sum of money.

I have not seen George Graves nor Ransom Miller but I have understood that Ransom Miller intends to go out to Indiana where his People live this fall. And I presume Graves cannot leave home as Mary is very sick [and] will doubtless not live a great while.

Our George has partly concluded to stay somewheres about here and finish tailoring. His health is good this summer and I think it would be a very good felon as he would not be much of a help in Michigan.

I know of nothing particular going on around [here]. Our friends are generally well. I have no more.

Mother says is disappointed in you as she expected you to come out this fall to live. I should like to know what girl showed how to do up your last letter.

I want you to be sure and secure me a claim if you possibly can as I expect to be there by the last of October if nothing intervenes to prevent me.

Yours, — John Waterman Briggs  (I will not add esquire)

Yates County Chronicle:
Wednesday, 19 March, 1884
“Mr. Samuel Botsford Buckley, died at Austin, Texas, on the 19th of February, of pneumonia. He was about seventy-five years of age. Mr. Buckley was a resident of Torrey, Yates county, before he went to Texas.”

Samuel Botsford Buckley (1809-1884) was a native of Torrey, Yates County, New York. He graduated from Wesleyan University in 1836, the year before this letter was written. According to the Wesleyan University Alumni Record, Buckley gathered botanical specimens in Virginia and Illinois in 1837-38, which is consistent with this letter.

One response to “1837: John Waterman Briggs to Joseph Briggs”