Holy Trinity Church in Hertford, N.C. Its construction in 1850 is described in this letter.

In both letters, Rev. Snowden discussed the construction of Holy Trinity Episcopal Church in Hertford, North Carolina. The following is from a church history:

In 1848 the Bishop of North Carolina appointed the Rev. William E. Snowden to be an Episcopalian missionary in Perquimans County. Snowden organized the parish on May 8th and it was received into union with the Episcopal Diocese of North Carolina on the 24th of that same month. Snowden became the first Rector, and Benjamin S. Skinner was the first Senior Warden of the Vestry.

At its founding the church had fourteen full members. Ten persons can be mentioned as very likely to have been among them. (1) Benjamin S. Skinner of Cove Grove plantation was the principal contributor to the church and its first lay leader. (2) His brother Edmund B. Skinner of Harvey’s Neck was one of the first persons buried in the church’s cemetery. (3) The Skinners’ nephew, Nathaniel Chapman Skinner, was a physician residing in Hertford. (4) Thomas F. Jones, a lawyer, had fought a duel in 1846 and would go blind before his death. (5) Jones’ sister Maria Louisa Jones Gordon was a doctor’s widow and she would leave orders for an ornamental fence around the family burial plot, one of the first of those funerary monuments which make the church cemetery one of the most beautiful in the area. (6) William Nixon was a planter of the Suttons Creek area who would in 1861 be the organizer and first captain of the “Perquimans Beauregards.” (7) His brother Thomas Nixon was the builder of Elmwood plantation. (8) Joseph G. Granbery was a coach maker in Hertford. (9) Elizabeth Freer of Hertford was a New Hampshire native who had married a South Carolinian who turned up in the town practicing medicine. (10) Josiah T. Granbery of Stockton plantation was a prominent planter and owner of a shad and herring fishery.

The new congregation acquired a disused street in the town of Hertford and in 1849 and 1850 set about constructing a church. On 27 April 1851, the Right Rev. Levi S. Ives, Bishop of North Carolina, “consecrated to the Worship of Almighty God, in the town of Hertford . . . a building by the title of the Church of the Holy Trinity, which does great credit to the christian liberality and good taste of the congregation, as being, by far, the best and most suitable wooden building in the Diocese; and constructed at an expense of 2000 dollars–a sum small in itself, but comparatively large for the ability of the worshipers.” The building still stands and is the oldest church building in the town. 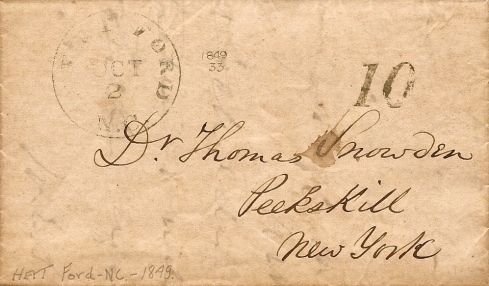 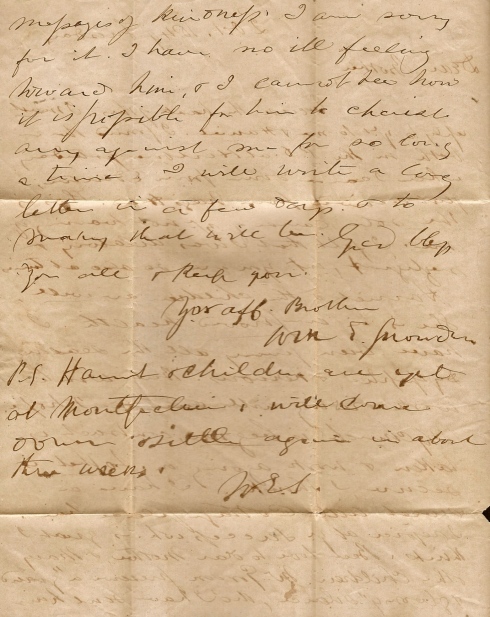 TRANSCRIPTION of LETTER ONE

Excuse the haste of this. I must reply to yours to me & Harriet. I found them both in the P.O. at Hertford yesterday when I came down from Edinton, just arrived from Nag’s Head. This is the sole cause of your not hearing of me. I felt that I was dilatory & negligent, but you are so also at times.

Harriet & the children are well. She is in improved health. I have been puny all the season — dyspeptic & nervous. But winter work _____ will cure me, I hope.

My church is begun, contract is taken, & work agoing on. So that is secure, I think. I have a sweet little cottage place here.

I rejoice at your success which is great, I think. Best love to dear Mother & Mary & the children. Mr. Gordon preserve a “grand & gloomy” silence, tho’ I have sent him messages of kindness. I am sorry for it. I have no ill feeling toward him, & cannot see how it is possible for him to cherish any against me for so long a time. I will write a long letter in a few days & to Mary that will be. God bless you all & keep you. Your affectionate brother, — Wm E. Snowden

P. S. Harriet & children are yet at Montpelier. Will come down & settle again in about three weeks. W. E. S. 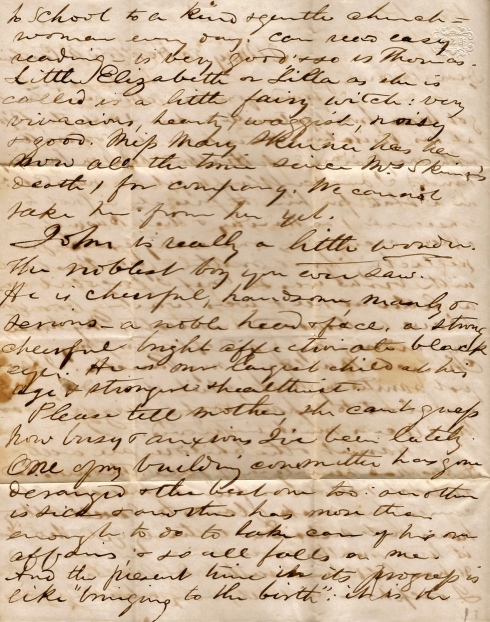 I found your last letter here when I got home from Gatesville where I met the Bishop at his visitation. He is to be at Woodville with me Friday & at Hertford (here) on Sunday (Trinity). I am scuffling to get our new church in a state for him to preach in (not to consecrate) on Sunday & that business — others occupying me in any excuse for neglecting you & mother. Your last note with _______ was so brief I forgoy it was a letter at all, & was waiting for you.

I have a thousand interests: My house, my garden, my yard and flowers, my church building, my parishes. I have not painted my house, which it needs greatly, am about to repair roof & piazza floor. My place is much improved.

Harriet & the children are well. Harriet had neuralgia of face. Thomas had roseola or french measles. It caused his neck glands to swell & they have not subsided entirely yet tho’ it is two months now since he recovered. It has left him rather delicate. Josephine is well, very interesting: goes to school to a kind & gentle churchwoman every day. Can read easy reading, is very good & so is Thomas. Little Elizabeth or ‘Lilla’ as she is called is a little fairy witch: very vivacious, hearty, waggish, noisy & good.

Miss Mary Skinner has her now all the time since Mrs. Skinner’s death for company. We cannot take her from her yet.

John is really a little wonder — the noblest boy you ever saw. He is cheerful, handsome, manly & serious — a noble head & face, a strong cheerful bright affectionate black eye. He is our largest child at his age & strongest & healthiest.

Please tell mother she can’t guess how busy & anxious I’ve been lately. One of my building committees has gone deranged & the best one too: another is sick & another has more than enough to do to take care of his own affairs & so all falls on me. And the present time in its progress is like “bringing to the birth”: it is the trembllng crisis. I am well. Tell mother I love her & think of her & you & sister.

Mr. Gordon preserves an obstinate silence towards me. Sister & her children are none the less dear to me. I hope her health is good. Excuse my failure to send you the present I spoke of this year. I fear it will prove a failure. I have tried in vain so far.

Harriet sends her best love to dear mother & love to your sister. We all kiss the children. Our children salute you all. We do not let them forget you, but teach them to love your memory.

You talk of our coming North this summer. I cannot afford it. It costs me next to nothing to go to Nag’s Head: it would cost a great deal to go to Peekskill & I am stretching & straining now.

My church will be finished in two or three months & is a noble & perfect church.

With my dearest love to mother & sister, your affectionate brother, — W. E. Snowden

Excuse this hasty scrawl. Harriet says she had the intention of writing to answer yours immediately, but company came in & occupied her when she ought to have written. Our convention is not yet: next week. I will tell you about it. Peace, I hope, will be the result. Do what you think right in the matter of the stone for brother’s grave, & bring me in equal with you, of course. There is no matter I will so gladly join in as this. Do not hesitate at all. Yours, — W. E. Snowden