This letter was transcribed directly from the internet where I found it offered for sale on e-bay in October 2011.

The author of this letter was Marx Edgeworth Lazarus (1822-1896), the son of Aaron Lazarus and Rachel Mordecai (1788-1838). Though raised in the Jewish faith of his ancestors, he — like the mother who raised and schooled him — questioned the dogma of Judaism and well as other faiths. In this 1847 letter, Lazarus characteristically challenges the practices of the Catholic faith as witnessed by his recent attendance to a Catholic Church in Georgetown, Virginia.

Lazarus is labeled an American “individualist anarchist” by Wikipedia. His eccentricity and radical thinking was legendary. He studied Homeopathy in Philadelphia, where he met Dr. Willing, but later sought attention challenging the great social questions of the day, such as marriage, religion, and slavery.

Lazarus mentions in this letter that he is has accepted a teaching position at a small farm near Boston. Later in life, he would establish a small farm near Guntersville, Alabama. Here, influenced by the popular teachings of François Marie Charles Fourier, Lazarus participated in the creation of an independent, self-sufficient society (like Brook Farm near Boston).

The recipient of the letter, Dr. Charles Willing (1806-1887) was a Harvard graduate and a professor at the University of Pennsylvania at Philadelphia. He was married to Rebecca Tillinghast — a sister of Mary Ann Tillinghast who was the wife of Truxton Dixon Beale (mentioned in this letter). Truston and Mary Ann Beale were the parents of Edward “Ned”) Fitzgerald Beale, making Ned the nephew of Dr. & Mrs. Willing.

You should have heard from me before but for some time past, since I resolved on returning north, I thought I might see you in a few days.

I have been persuaded to take care of a small farm school here with prospect of enlarging it or connecting with it a water cure establishment if I find I can get along satisfactorily. I have then no immediate prospect of leaving the vicinity of this place, & though uncertain of your being now in Pa., take the chance to return with thanks the sum you lent me.

I feel too little sanguine of the success of the affair in which I have embarked much against my inclinations, to enlarge upon our views. I feel it a sort of penance I owe for years of irregularity and idealizing, to make this effort to incarnate or organize even in the humblest sphere, that order in the avocation of which I am shocked and grieved by the conscience of my practical insincerity. The people who own the farm apparently coincide with me in aspiration or theoretical views, but in the process of transition, or reducing them to practice, all remain vague. Everything remains to be created on the farm, which offers good enough materials, & many springs of fine water might be well employed had I the capital necessary to erect buildings, &c. If we make anything of it, you will hear, but at present, I anticipate, besides the temporary benefits of instruction to the pupils, little more than a salutary course of self discipline, which in a rude & severe life, sacrificing inclination to principle, may strengthen me for some future work, commenced under more auspicious stars.

I shall commence operations in a few days, with 6 children & the general supervision of the farm, recently purchased, where workmen are employed in building, & in which my assistants are a practical farmer & one hand hired in the neighborhood, and a German housekeeper, who seems to be a fine woman, but who speaks no English. I hope you are entering upon a pleasant winter. It is terribly cold here, but you laugh at that in a well ordered house.

I spent some pleasant hours in Washington with Truxton [Beale]. We visited Georgetown College together, but all the old faces were gone, and the landscape was bare & wintry. It was the retreat, a season of penitence with them. We entered the chapel and were much edified to learn the great leniency with which the tender Mother Church had comminuted the penances of former times, such as standing wrapped in a sheet barefoot at the chapel doors during service, & fasting on bread & water for 10 years; for the duty of repeating a few paters and aves in expiation of the same offences. It was amusing in this age to hear such things uttered in all simplicity without the remotest design to criticise, & as a touching proof of the tenderness of the church for her children. Preserving their rigid organization however, wherein so much zeal and talent are molded towards a unitary end, the ministers of the Catholic Church seem to utter with impunity, what intellectual absurdities they please. The source of their power lies deeper. They despise reason, but understand the management of the passions with unrivalled art. Thus we have seen through the Confession, absolution, communion, this church always folding under its wing the humanity of the age. Neither better nor worse than its morality, the church has cherished the religious sentiment whilst carefully providing against its collision with the other passions, whether their development was harmonious or subversive.

The robber, or assassin, often felt glow within his breast as warm a sentiment of religious enthusiasm as the Saint, and was as ready to die for his faith, though perhaps in a different way. I see no more insincerity here certainly, than in the professions of religion connected with all those moral & social obligations, which will, in a true society, really flow from religion, or lead towards it, but which are daily violated in false societies; thus placing the individual in the most complete disunity with himself, & rendering him atheistical, by causing his sins & the impossibility under which he feels to leave them, entirely shut against him the sympathies of heaven, which the Catholic Church, better adapted to the ages of ______ held open to him always.

Yet, there is no institution of this Church which does not seem equally adapted to exalt virtue as to shelter vice, and it is not less the cherished home of the Saint than of the Sinner; thus affording, in spite of its own mythology, (if indeed this too does not equally contain the doctrines of the Presbyterian and the Universalist), a type of the final union of all Nations, ages & characters under the fold of a universal church, when the “Earth shall be full of the knowledge of the Lord, as the waters cover the sea.” I should be delighted to hear from you or Mrs. Willing any time you may feel inclined to write, & what is more, I do not require to be answered in the abstractions of which I am often so prodigal. 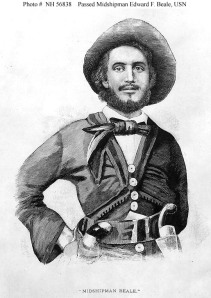 I spent a pleasant half hour with Marianna in the country, where she was bedded in flowers & diffusing the sweet & holy atmosphere of maternity. I felt a beautiful peace flow into me – my demon waited for me outside the door & the foot of the Wandering Jew found rest.

On the table lay a magnificent sword and epaulets presented to Edward [Edward Fitzgerald Beale] for his chivalrous conduct in California. You are doubtless acquainted with his exploit in saving Kearney’s force in the gorges of the mountains, by creeping through 6 miles of the enemy’s camps, & walking barefoot over those mountains covered with prickly pears to Stockton’s camp. Fire the soul of man with ambition & corporate devotion, & he becomes a Demi God. I hope Ned will be promoted according to his noble merit. With affectionate remembrance to Mrs. Willing. Believe me very truly yours, — M. E. Lazarus

One response to “1847: Marx Edgeworth Lazarus to Dr. Charles Willing”