From this letter, we learn that Daniel Lewis was a student at the DeRuyter Institute, which was inaugurated by the Seventh Day Baptists in 1836 but “heartily patronized” by the Presbyterians, Friends and others in DeRuyter, New York. Efforts to establish the school were begun in 1834 by the untiring zeal of Elder Alexander Campbell — mentioned in this letter as an adviser to young Lewis and in whose home he took his board. The school was not completed until 1836 and Solomon Carpenter was appointed Principal and Sarah Robinson appointed Preceptress. However, the school did not open until Fall of 1837 when Eber M Rollo was appointed Principal.

We also learn that Daniel Lewis shared a room at the Institute with the son of Joshua Cottrell Sisson (b. 1787) and Catherine Saunders (1795-1857) of Plainfield, New York. Daniel claims his roommate was approximately the same age as himself so it was probably Joshua Gorton Sisson (1822-1879) to whom he referred. A younger son, Luther Spencer Sisson (1824-1887) is known to have attended the Institute in 1841 but this was probably after Daniel’s attendance. The Sisson daughter attending in 1839 was probably Frances (“Fanny”) Abigail Sisson (1819-1890). 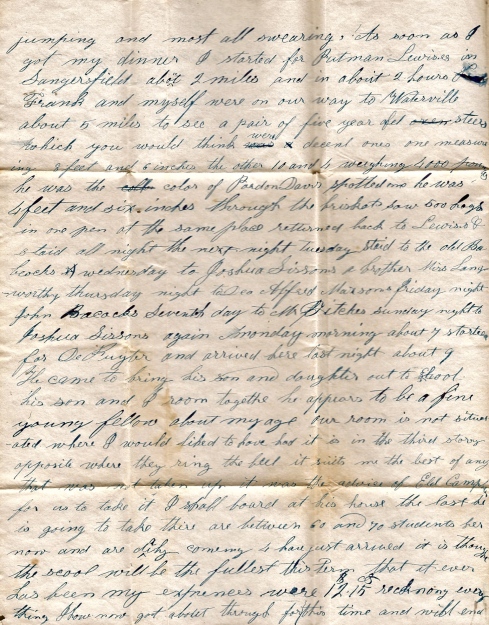 Knowing that you will want to hear how I have got along, I now sit down to write a few lines to you. I arrived here last night and all is safe and sound. I started from Stonington [Connecticut] on Wednesday the 4th about 9 o’clock in The Lexington and arrived at New York [City] about 8 in the morning. Started again 5 minutes after 5 for Albany and got there 20 minutes before 2 in the morning — the quickest trip ever made. Started again for Utica half past 8 [and] arrived half past 3. The stage had gone and we hired a man to send us down to Bridgewater in a coach. Our driver, being about 14 or 15 years old, was never there before. It was very dark in the evening and rained some. He drove off on one side of the road and turned the carriage over and threw us all out into the ditch. It did not hurt any of us much. Lacy was hurt the worst — Miss Bently falling on top of her. We arrived there about 9 o’clock Friday night and put up.

Next morning, I started on foot for John Utter’s about 1 1/2 miles. He sent out for Mr. Bently and wife. We now began to visit. Mr. B. & wife went to Mr. _____’s. I went back from meeting to Utter’s and staid all night. Next morning — Sunday — I went to the old Babcock’s, George Sams, [In] afternoon getting a ride over to Beaver Crick, I went to Henry Babcock’s where Lacy lives [and] staid all night.

On Monday, went to Belinda Webb’s and took dinner. While I was there, from 5 to 10 men were about the house some dancing on the doorstone some, jumping and most all swearing. As soon as I got my dinner, I started for Putnam Lewis’s in Sangerfield about 2 miles and in about 2 hours Frank and myself were on our way to Waterville — about 5 miles — to see a pair of five year old steers which you would think were decent ones. One measuring 8 feet and six inches; the other 10 and 4, weighing 4000 pounds. He was the color of Pardon Davis’s spotted one. He was 4 feet and six inches through the briskets. Saw 500 hogs in one pen at the same place. Returned back to Lewis’s & staid all night. The next night — Tuesday — staid to the Old Babcock’s & Wednesday to Joshua Sisson’s — a brother [of] Miss Langworthy, Thursday night to Dea. Alfred Maxson’s, Friday night [at] John Babcock’s, Seventh day to Mr. Fitches. Sunday night to Joshua Sisson’s again.

Monday morning about 7 started for DeRuyter and arrived here last night about 9. He came to bring his son and daughter out to school. His son and I room together. He appears to be a fine young fellow about my age. Our room is not situated where I would liked to have had it. It is in the third story opposite where they ring the bell. It suits me the best of any that was not taken up. It was the advice of Elder [Alexander] Campbell for us to take it. I shall board at his house — the last he is going to take. There are between 60 and 70 students here now and are daily coming. 4 have just arrived. It is thought the school will be the fullest this term that it ever has been.

My expenses were $12.15 reckoning everything. I have now got about through for this time and will end sating I am well excepting a bad cold.

A little bit to Nathan. I had almost forgotten to tell you that Doctor [A. S.] Saunders was married last 5th day to a Miss Harriet P. Franklin in Brookfield. I saw them to conference seventh day. I also saw Lucius and his wife there and such singing as they had there would make all our folks blush. Now I must close making no excuses for bad writing or weak stuf. You must all write when you can, — Daniel Lewis