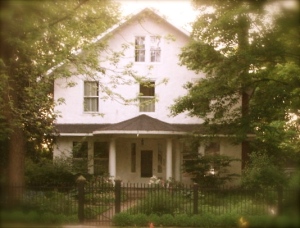 Dr. Lyman wrote the letter to his older brother, Rev. Orange Lyman (1780-1850) who was born in Torringford (or New Hartford) CT. He graduated from Williams College, studied theology under Rev. Dr. Porter of Catskill, NY, and became a Presbyterian minister. In 1814, he married Maria Dewy (or Dewey). His pastoral assignments took him to western New York, northeastern Ohio, and finally to northern Illinois. At the time this letter was written in the summer of 1840, Rev. Lyman had recently settled into his new home in Downers Grove, DuPage County, IL. His home, built in 1839, is reported to be the oldest residence still standing in Downers Grove. 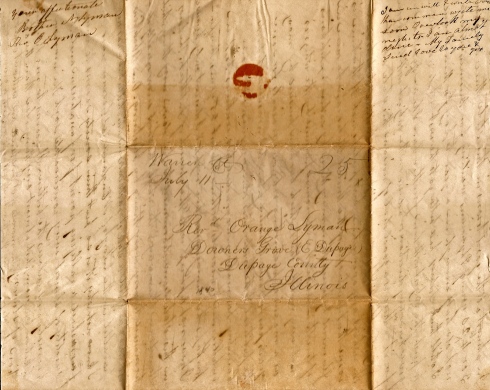 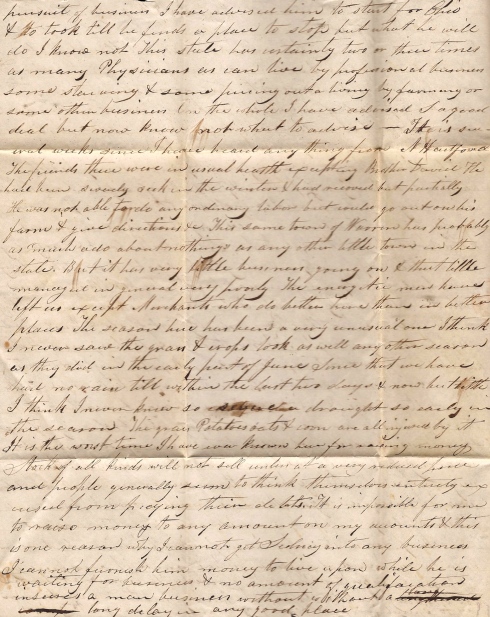 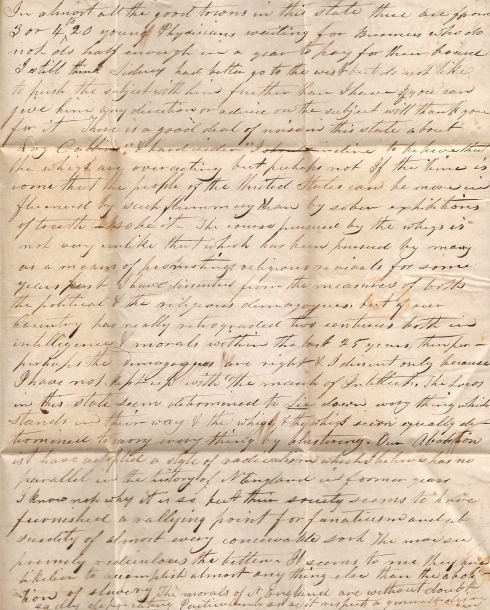 When I received your letter of last February, no one could have made me believe that I should so long neglect to answer it. Very soon after I received it, we had a period of unusual sickness from Canker Rash in a worse form than I have before seen it. I was for many weeks very much occupied & worn. For the last 6 months, though not confined by sickness, my health has been constantly very poor. My defect of sight has become very troublesome. I cannot see to make a pen or hardly to use it when made, & my hand is even more tremulous than it used to be. Still I keep about & every day do a little.

My family, excepting my oldest daughter Mary, have had nearly their usual health. She has always been rather feeble & early the last winter began rather imperceptibly to decline in health. She gradually lost flesh & had slight hacking cough. From that time to the present, she has had cough without expectoration, quick pulse, night sweats, & gradual emaciation. She is still able to be up & walk about the house & ride out in pleasant weather but there seems to be no decided abatement of ay of her symptoms. I need not add that I have had a most wearing anxiety on her account.

Edward’s health is very comfortable – much better than we expected it would ever be one year ago. Mrs. Lyman is much worn but in usual health. Sidney has spent a considerable time this season in looking for a stand for his professional business but when ever he has heard of a place, he has found it occupied by at least one or two before he arrived. He is now at home not knowing what to do next, having neither much money to spend in journeying nor much courage to the pursuit of business. I have advised him to start for Ohio & to look till he finds a place to stop but what he will do, I know not. This state has certainly two or three times as many Physicians as can live by professional business – some starving & some piecing out a living by farming or some other business. On the whole I have advised Sidney a good deal but now know not what to advise.

It is several weeks since I have heard anything from N. Hartford. The friends there were in usual health excepting Brother David. He had been severely sick in the winter & had recovered but partially. He was not able to do any ordinary labor but could go out on his farm & give directions &c.

This same town of Warren has probably as “much ado about nothing” as any other little town in the state. But it has very little business going on & that little managed in general very poorly. The energetic men have left us except merchants who do better here than in better places. The season here has been a very unusual one, I think. I never saw the grass & crops look as well any other season as they did in the early part of June. Since that, we have had no rain till within the last two days & now but little. I think I never knew so severe a drought so early in the season. The grass, potatoes, oats & corn are all injured by it. It is the worst time I have ever known here for raising money. Stock of all kinds will not sell unless at a very reduced price and people generally seem to think themselves entirely excused from paying their debts. It is impossible for me to raise money to any amount on my accounts & this is one reason why I cannot get Sidney into any business. I cannot furnish him money to live upon while he is waiting for business & no amount of qualifications insures a man business without a long delay in any good place. In almost all the good towns in this state, there are from 3 or 4 to 20 young physicians waiting for business who do not do half enough in a year to pay their board. I still think Sidney had better go to the West but do not like to push the subject with him further than I have. If you can give him any direction or advise on the subject, will thank you for it.

There is a good deal of noise in this state about “Log Cabins & hard cider.” I incline to believe that the Whigs are overacting but perhaps not. If the time is come that the people of the United States can be more influenced by such flummery than by sober exhibitions of truth – so be it. The course pursued by the Whigs is not very unlike that which has been pursued by many as a means of promoting religious revivals for some years past. I have dissented from the measures of both the political & the religious demagogues, but if our country has really retrograded to extremes both in intelligence & morals within the last 25 years, then perhaps the demagogues are right & I dissent only because I have not kept up with “the march of Intellect.” The laws in this state seem determined to lie down every thing which stands in their way & the Whigs seem equally determined to carry everything by blustering. Our Abolitionists have adopted a style of radicalism, which I believe has no parallel in the history of New England in former years. I know not why it is so but their society seems to have furnished a rallying point for fanaticism and absurdity of almost every conceivable sort. The more supremely ridiculous, the better. It seems to me they were likelier to accomplish almost anything else than the abolition of slavery. The morals of New England are without doubt sadly deprivating – particularly so as it respects a general disregard.

I am unwell & write worse than common. Write me soon. Overlook my neglects. I am almost done. My family send love to you & yours.