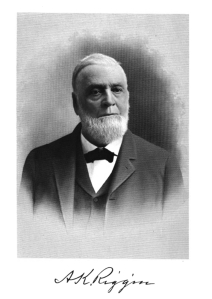 This letter was written by William Bolivar Riggin, who was born in Lebanon, Illinois, December 11, 1826. He belonged to a prominent Lebanon family whose name appears in the story of the founding of McKendree College. He was for several years a student in the college, and graduated in the class of 1851. He was a member of the Philosophian Society. He studied medicine, and received the degree of M. D., but was not permitted to practice his profession long. His career was cut short by his death at Asheville, North Carolina, August 8, 1856.

William wrote the letter to his cousin Augustus Kerr (“Gus”) Riggin (1822-1903). Gus’s father, Harry Riggin, was a native of Tennessee, born September 2, 1793, and was of Irish descent. Coming to Illinois in 1817, he first located in the American bottom and then with his brother settled in Madison county at a place called Troy, they being the principal parties in laying out the town. There they embarked in merchandising, but were unsuccessful in that business. On the 2d of March, 1820, Harry Riggin was united in marriage to Miss Miriam Lee Rogers, a native of New York and a descendant of John Rogers, who suffered martyrdom for religious principles. Her father, Matthew Rogers, was from Connecticut and removed from that state to New York. He married Miriam Lee Morse. In 1818 Matthew Rogers came to Illinois and settled near Athens, where he built a frame barn, which was the first frame building erected north of the Sangamon river. During his residence in Menard county Harry Riggin followed the occupation of a farmer and possessed the confidence and esteem of the community. On several occasions he was a candidate for public favors, but was defeated, which was not surprising, as his opponents were generally such prominent men as Logan, Edwards and Lincoln. He and his wife were members of the Cumberland Presbyterian church and lived to a good old age. Harry Riggin had six children, four of whom reached years of maturity, namely: Mary Ann, wife of Claiborne Hall, of Athens; Augustus Kerr; Eliza Maria; and Arminda Priscilla, wife of McKinley Jones, of Athens.

Augustus Kerr Riggin was reared amid pioneer scenes and could relate many interesting incidents of frontier life in this region. As his parents were great friends of education and progress, they gave their children every school advantage that they could and “Gus” was early qualified for teaching, which profession he followed for several years. He attended McKendree College and completed his education at Illinois College in Jacksonville, where he numbered among his classmates General Lippincott and John L. Stocking. After teaching school for several years he studied law in the office of Major Harris, of Petersburg, and was admitted to the bar, but never practiced his profession. He served two terms as circuit clerk and on his retirement from office in 1860 turned his attention to farming, which occupation he followed up to within the last year or two of his life, when his sons relieved him of the management of the farm. He gave considerable attention to stock-raising, making a specialty of shorthorn cattle, and found that branch of his business very profitable. 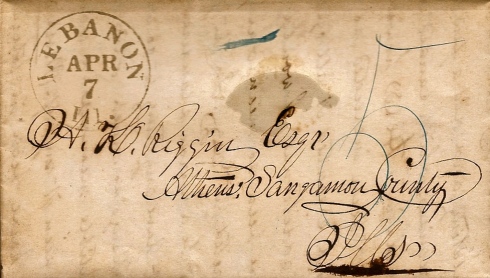 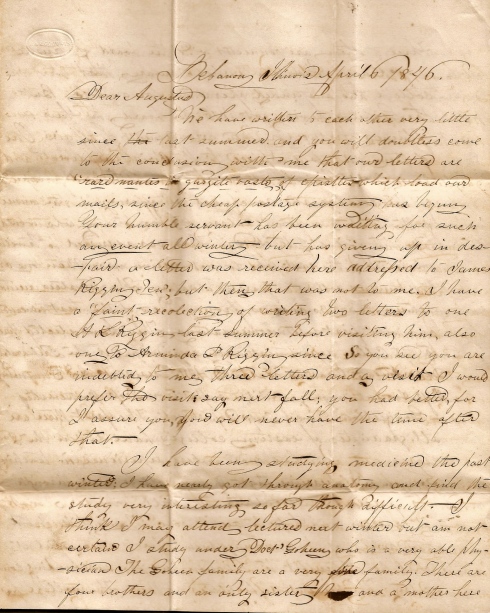 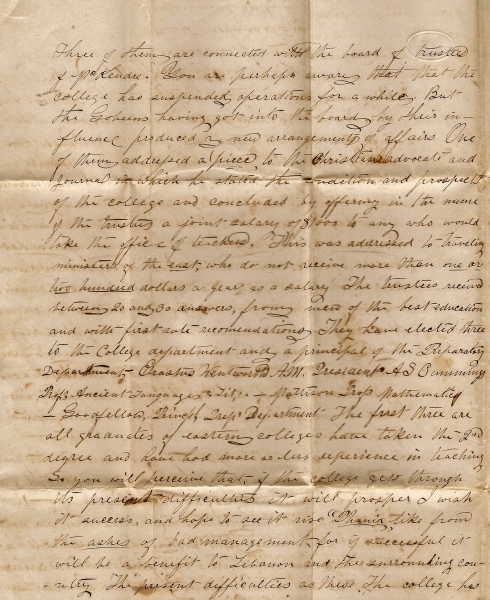 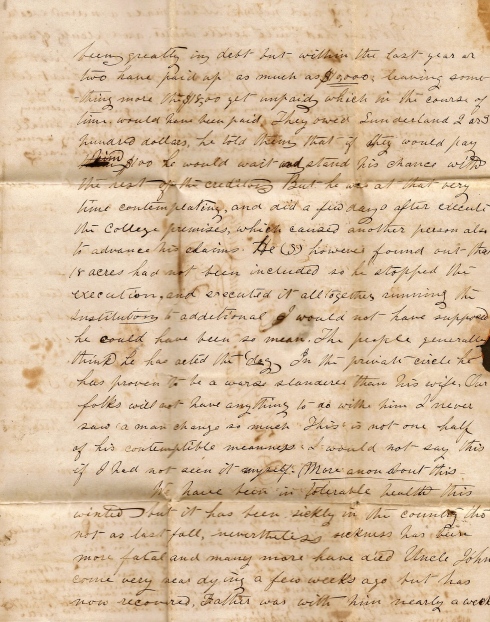 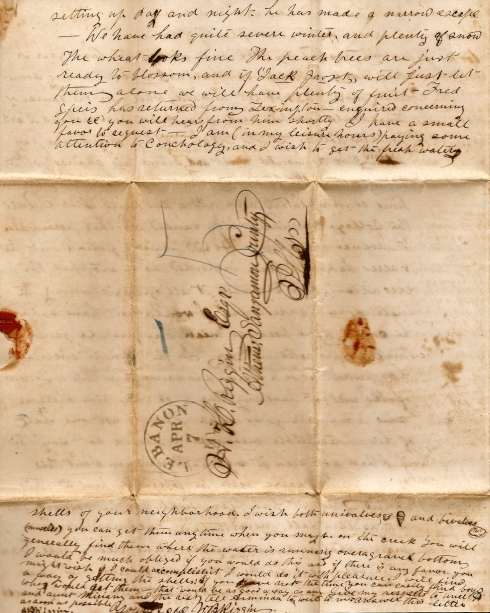 We have written to each other very little since last summer and you will doubtless come to the conclusion with me that our letters are “are nantes in gurgite vasto” of epistles which load our mails. Since the cheap postage system has begun, your humble servant has been waiting for such an event all winter, but has given up in despair. A letter was received here addressed to Jams Riggingden, but then that was not to me. I have a “faint” recollection of writing two letters to one A. K. Riggin last summer before visiting him. Also one to Arminda P. Riggin since. So you see you are indebted to me three letters and a visit. I would prefer the visit — say next fall. You had better, for I assure you, you will never have the time after that.

I have been studying medicine the past winter. I have nearly got through anatomy and find the study very interesting so far, though difficult. I think I may attend lectures next winter but I am not certain I study under Doctor Goheen who is a very able physician. The Goheen family are a very fine family. There are four brothers and an only sister and a mother here. Three of them are connected with the board of trustees of McKendree.

You are perhaps aware that [McKendree] College has suspended operations for awhile. But the Goheens having got into the board by their influence produced a new arrangement of affairs. One of them addressed a piece to the Christian Advocate and Journal in which he stated the condition and prospects of the college and concluded by offering in the name of the Trustees a joint salary of $1,000 to any who would take the office of teachers. This was addressed to traveling ministers of the East, who do not receive more than one or two hundred dollars a year as a salary. The trustees received between 20 and 30 answers from men of the best education and with first rate recommendations. 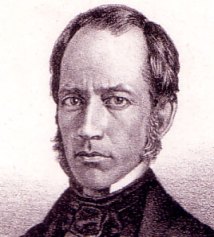 They have elected three to the college department and a principal of the preparatory department — Erastus Wentworth, A.M. President; Anson S. Cummings, Prof, Ancient Languages & Literature; Mathison, Professor Mathematics; Goodfellow, Principal of the Prep. Department. The first three are all graduates of eastern colleges have taken the 2nd degree and have had more or less experience in teaching. So you will perceive that, if the college gets through its present difficulties, it will prosper. I wish it success, and hope to see it rise “Phoenix” like from the ashes of bad management, for if successful, it will be a benefit to Lebanon and the surrounding country.

The present difficulties are these; the college has been greatly in debt but within the last year or two have paid up as much as $10,000, leaving something more than $1800 yet unpaid, which in the course of time would have been paid. They owed Sunderland 2 or 3 hundred dollars. He told them that if they would pay him $100, he would wait and stand his chance with the rest of the creditors. But he was at that very time contemplating and did a few days after execute the college premises, which caused another person also to advance his claims. He (Sunderland), however, found out that 18 acres had not been included so he stopped the execution, and executed it all together running the Institution to additional [expense]. I would not have supposed he could have been so mean. The people generally think he has acted the “dog.” In the private circle, he has proven to be a worse slanderer than his wife. Our folks will not have anything to do with him. I never saw a man change so much. This is not one half of his contemptible meanness. I would not say this if I had not seen it myself. More anon about this.

We have been in tolerable health this winter but it has been sickly in the country tho not as last fall. Nevertheless, sickness has been more fatal and many more have died. Uncle John came very near dying a few weeks ago but has now recovered. Father was with him nearly a week sitting up day and night. He has made a narrow escape.

We have had quite severe winter and plenty of snow. The wheat looks fine. The peach trees are just ready to bloom, and if “Jack Frost” will just let them alone, we will have plenty of fruit. Fred Speis has returned from Lexington — enquired concerning you. You will hear from him shortly. I have a small favor to request. I am (in my leisure hours) paying some attention to Conchology, and I wish to get the fresh water shells of your neighborhood. I wish both univalves and bivalves (mussels). You can get them anytime when you may be on the creek. You will generally find them where the water is running over a gravel bottom. I would be much obliged if you would do this and if there is any favor you might wish if I could accomplish it, I would do it with pleasure. I will find a way of getting the shells. If you have not the time, you can easily find boys who could get them. That would be a good way as any.

Give my respects to Uncle Harry and Aunt Miriam and the rest. Tell [your sister] Arminda to write to me. Answer this letter. Yours &c. &c. — W. B. Riggin